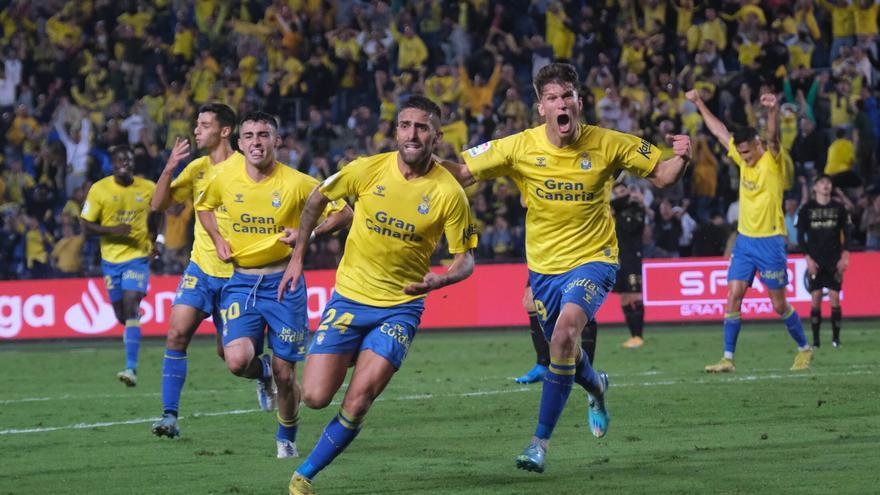 They kept the secret well. They hid the wounded wolf within them in sheep’s clothing all week. Although everyone at Unión Deportiva Las Palmas took pains to ensure that there was no spirit of revenge against Tenerife for their elimination in the playoff five months ago, reality showed that something had remained unresolved. A matter of pride. It began with those enormous desires UD Las Palmas to win the first derby of the season and ended it with a bath of football as incontestable as the result, 3-1and with a hero from Barbate, Pejiño, author of two great goals after two left-footed lashes. Then Andone sentenced in the discount when the game had already died and Dauda lowered the forcefulness of the score. He did not care, because more than a party, what he had already set up in a Gran Canaria Stadium with 31,047 spectators it was a party.

There was no discussion or rival that could stop this UD Las Palmas who recovered their best version of the course to leave behind the streak of four games without winning and recover the second place that they will keep if Burgos does not win, because beyond the sentimentality of the derby, what matters is what matters. Each and every one of the yellow players lived up to it, much better than other times, surely because of the energy that the stands gave off. As Xavi García Pimienta also complied with, to whom a new good result and some good decisions in the line-up, this time, they once again proved him right. Actually, there is no discussion in the form. There is no debate. The sum of everything allowed Las Palmas to rule from start to finish and leave Tenerife with a single shot between the sticks. Incontestable.

The Catalan coach rewarded those who a week before had improved the team in the second part of the event at the City of Valencia. He didn’t want to confirm it the day before, but he knew that a different option wasn’t going to be fair. Thus, the offensive front changed completely, with Pejiño and Moleiro on the wings, and Marc Cardona as the center forward. The three made a great game. The defense and midfield seem untouchable now. Luis Miguel Ramis, for his part, opted for the system that always gave him results against García Pimienta, the 4-4-2, but with less important names than five months ago. It was noticed.

As well as the intensity of La Palmas from the beginning, from the first action in the kick-off that ended in the first foul of the game after five seconds. There was a certain general fear due to the patience prescribed by Jonathan Viera and the coach during the week, because the excess of it had led to slowness against Tenerife that had turned out to be fatal. It was not so. UD Las Palmas was from the beginning the second period against Levante, mobile, fast, dangerous. And so, almost logically, he was able to create chances against an opponent who didn’t know where they were coming from.

In a quarter of an hour, the yellows came close to scoring on three occasions, the first of them after a mistake by Carlos Ruiz, whom age is beginning to outgrow, which Moleiro was unable to specify because he failed to make the cut before being left alone against Juan Soriano (8′). The man from Tenerife, ultra-motivated on his return to ownership, redeemed himself with a great action on the left in which he danced to Aitor Buñuel and then reached the end line and provided a back pass with which Viera tried to score with a hit surprise with the interior to the first post. Soriano was fine (14′). As also in Pejiño’s first lash of the day, very focused, after another great play by Moleiro on the other side.

Perhaps due to that desperation based on the inability to contain an injured animal and with a thirst for revenge, Waldo lost his head and mowed down Pejiño from behind, at knee height. The color of the card could well have been red, but at least Hernández Maeso made it clear that he was not going to tolerate such actions, nor was Enric Gallego’s blows in the jumps: the Catalan saw a card very shortly after for putting his arm in the coconut face. Also Jonathan Viera after losing a ball and kicking Elady. By then, 10 minutes before the break, the soufflé had gone down, however, in the Las Palmas procedure a heat stroke had been reserved at the end.

A flash in the form of a goal, the product of a play that defines this team perfectly. A mastery action. Jonathan Viera started it on the left side, through which the Cardonas were seen. Marc received from the captain and touched for Sergi, who inched towards the center on the edge of the box before handing the ball to Loiodice, who followed the path of the ball to the right with a heel shot because he had no choice until it appeared Pejiño like a train, with an enormous desire to burst the ball, to shoot Juan Soriano and cause the Siete Palmas boiler to explode (39′).

The bit of justice

The goal did justice because UD had managed to transform all their dominance into an advantage that could have been greater before the intermission if Marc, in another baroque action by the yellows, had found the net with a left-footed shot, but the goalkeeper avoided it . Las Palmas went to the locker room with the game where they wanted, completely dominated and with an opponent missing in action, totally subdued and needing to open up if he was to at least try to get an equalizer.

He didn’t, but more than because he didn’t want to, because Las Palmas didn’t allow him to. Initially because he monopolized all possession of the ball, and then because Pejiño had not been satisfied with his first goal and pulled another even better one out of his hat before it came to game time. In full football control of UD, with certain lucid moments in attack and without suffering in defence, he dribbled past two rivals on his way from the right to the center to surprise Soriano with a left-footed shot from far away, who saw the ball enter very near his left stick. The Barbateño was so comfortable that he remained standing on the same point where he had stayed after kicking. With that stamp, without speaking, he said ‘Here I am’ (57 ‘). Minutes later he felt discomfort and left.

There was half an hour left, but the game was finished. Soccer is soccer, with everything that the expression indicates, but UD was not going to let the vicissitudes come and snatch away a night that was theirs. Tenerife, even with the changes, was unable to react against an infinitely superior rival who preferred not to crush the recent executioner, because they could have tried. He chose to own the ball a little more if possible and at times even turned it over in search of any steals or losses that could send Marvin and Andone running at full speed.

The plan came out, because the Romanian won a duel against his defender and beat the goalkeeper low at the moment at hand. Doubled ecstasy. No yellow cared about Dauda’s goal minutes later. In fact, he served to unleash the mockery of the 31,000 yellows towards the 690 blue and white. He was part of the party.

Referee: Hernández Maeso (C. Extremeño). He admonished the locals Jonathan Viera, Coco, Mfulu and Andone, and the visitors Waldo and Enric Gallego. In the VAR was Ocón Arraiz (C. Riojano).

Incidents: match corresponding to the seventeenth day of LaLiga SamrtBank, played at the Gran Canaria Stadium in front of 31,047 spectators.

Tegueste spreads its wealth with a program of 39 guided routes

The Aqualia company helps with 1,625 euros to the Caritas shelter