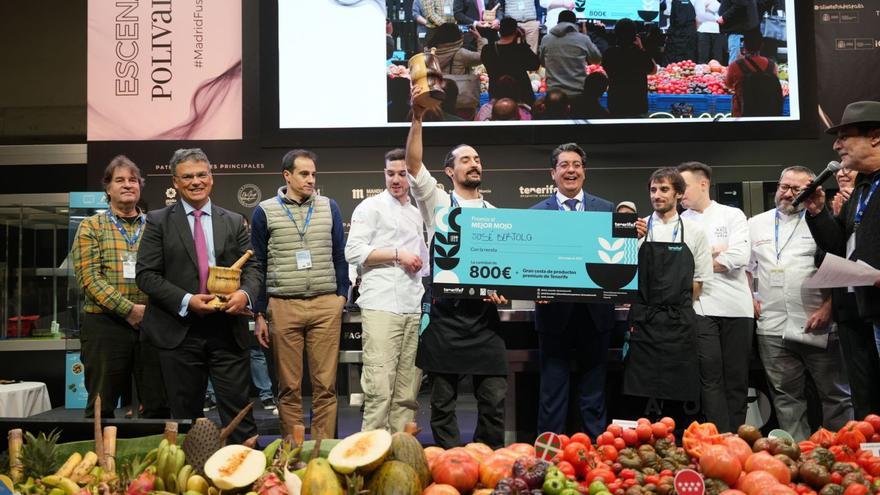 The Galician José Bértolo Fernández, from Casa Solla (Poio, Pontevedra), won the prize for best mojo sauce in the III national contest held within the framework of Madrid Fusión for his green mojo sauce with seaweed and fish pil pil collagen . Another chef from outside Canary Islandsthe Majorcan Josep Arenas Llompart, from the Andreu Genestra restaurant, won the prize for the best dish with the typical sauce of the islands harmonized with wines from Tenerife for its culant (cake) with smoked mojo sauce, roasted eggplant, tendons and smoked eel. The Island organized some twenty activities in an intense second day of the gastronomic congress that concludes today at Ifema.

Chefs from all over Spain with several Michelin stars participated in the mojo contest. The six finalists showed the infinite possibilities and subtleties that Tenerife mojos have in contemporary cuisine. The Island’s participation in Madrid Fusión continued yesterday with various workshops on local products and tastings in which municipalities from the north and south showed the best of their gastronomy.

The president of the Cabildo, Pedro Martín recalled that, for the first time this year, the Tenerife exhibitor has a specific space for municipalities to present their differentiated local offer as an essential part of their tourist attraction. He highlighted “the presence of hospitality students, artisans and other professionals because they achieve excellence in the gastronomy of Tenerife”. The councilor for the primary sector, Javier Parrilla, praised the quality of Tenerife’s products with which it is beginning to gain a foothold among gastronomic destinations. The insular director of Tourism, Laura Castro, valued gastronomy as a complement to sustainable tourism. The Tenerife Tourism Minister, David Pérez, emphasized the effort to bring flavors, experiences and products from all corners.

From the whole island.

The bigeye tuna from the Acantilados de los Gigantes, the craft beer La Ranilla from Puerto de la Cruz or the black pig from Adeje were the stars at the hands of the restaurateurs Samuel Morales (Pejeverde), Fran Rodríguez (Pancho) and Diego Ferro (Budha Sano ). Candelaria, for its part, today offers a workshop on salty grouper with onions, by José Ignacio (La Casona del Vino); and Hilda Zapata and David Gibello gave it on Monday about rabbit chowder, a traditional dish from Icod de los Vinos.

The Tenerife post once again sold out places in all its meals and activities on a day dedicated to the south. It began with a breakfast among banana trees, prepared by the Lucas Maes and Finca las Delicias restaurants. The lunch focused on the harmony of local flavors in the kitchen of the hotels, with the restaurants Bocconcino (Royal Hideaway), Hotel Guía de Isora; Bogey (The Burrows) and Donaire (Victoria). The snack featured cheeses from the south, paired with wines from the DO Abona, Valle de Güímar and the Canary Islands.

During the day, prestigious chefs and journalists such as Joan Roca, Juanjo López, Joaquín Felipe, Ricard Camarena, Juanma Bellver and Carlos Maribona passed through this part of Tenerife in Madrid.

A trip from Tenerife to the world

A trip from Tenerife to the world. Adrián Bosch and Eduardo Domínguez, from the San Hô restaurant, located in La Caleta de Adeje and recently awarded a Michelin star, filled the main congress auditorium with a presentation with such an attractive title. That very thing, a journey from the Island to the universal planet of gastronomy, was what I did. Throughout the meeting, the chefs explained that their work is based on childhood memories, the flavors of Tenerife and their great team of local producers. Although always rethought based on advanced fermentation techniques and the Tenerife reinvention of dashi broths, classics of Japanese cuisine. In their elaborations they used products such as moray eel and cured egg yolk, Canary squid, onion essence, ginger and young miso butter, bigeye tuna, amberjack from the sandbank, stewed broth, aged miso or gofio. Exit. | JDM

The Mayor welcomes the 29 people who are beginning the training phase of the “Santiago del Teide, Reactiva” project