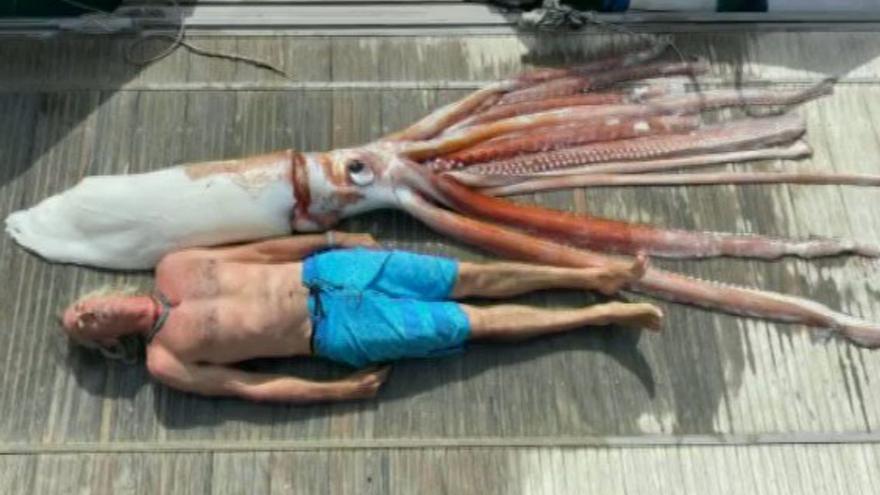 It is an exceptional find for science and for nature lovers in general: a giant squid (Doge Architeuthis), a kraken of more than three meters in length and around 90 kilos of weight which was found floating about three miles southwest of Tenerifein the marine channel between this island and that of La Gomera. And the most amazing thing of all is that he was found very shortly after he died, an unusual encounter because most of these specimens when they reach the surface are already in an advanced state of decomposition after having died in the depths of the ocean. On this occasion, “The animal was shiny and kept its eyes, which are the largest in the animal kingdom, the size of a handball ball”relates Theo Lucasa Physical Education teacher at the Benito Pérez Armas Institute, who was in the port of Los Gigantes and picked up the specimen on his boat, the Steno, around 1:00 p.m. last Saturday.

The proliferation of findings Architeuthis in this area endorses the hypothesis maintained by scientists such as the biologist Alejandro Escanezfrom the University of Vigo, which indicates that the waters between Tenerife and La Gomera are a hunting and breeding area for giant squidan affirmation that would be endorsed by the fact that most of the specimens found are females.

Teo Lucas, who is also the founder of the Blue Giant Association, He says that “it was a ship dedicated to carrying out whale watching routes for tourists” who gave him the notice of the sighting of this giant squid and very shortly after he received another notice from another ship from which they told him that “the squid It was over two meters tall and was in a very fresh state,” says this nature lover who has been documenting marine species since 1998. “I didn’t think about it, I asked for help from the Los Gigantes fleet and set course for the place of the discovery.”

Finding a giant squid or kraken is something very rare and if it was also as fresh as indicated, the finding would be exceptional, so Lucas did not hesitate and headed towards the coordinates that he had been told“about six or seven miles from the port of Los Gigantes”, although the animal found it “about two or three miles from the southwest coast of Tenerife”he assures.

Although the Secondary teacher has already collected several specimens, this was the first in such good condition. And it is that in addition to how spectacular it is to see eyes the size of handballs, it will be one of the few times that they can be studied when the necropsy is performed.

For his part, the marine biologist Alejandro Escánez has referred that the waters of the channel that exists between the islands of Tenerife and La Gomera are one of the most important areas in the world for giant squid. Until very recently, specifically until 2007, it was thought that giant squid only had sperm whales as predators, but that same year it was found in Tenerife that pilot whales also feed on these huge invertebrates. And with the finding documented this Saturday by Teo Lucas, the hypothesis could have more weight because, as he himself relates “shortly before reaching the place where this kraken was floating, we sighted an adult male pilot whale”a cetacean that proliferates in this area and is capable of expelling sperm whales and other competing species for the resources they feed on.

Avocado thefts in Güímar do not stop despite the latest arrests

The murga Los Mamelucos will go up with another director in the Grand finale in the morning....