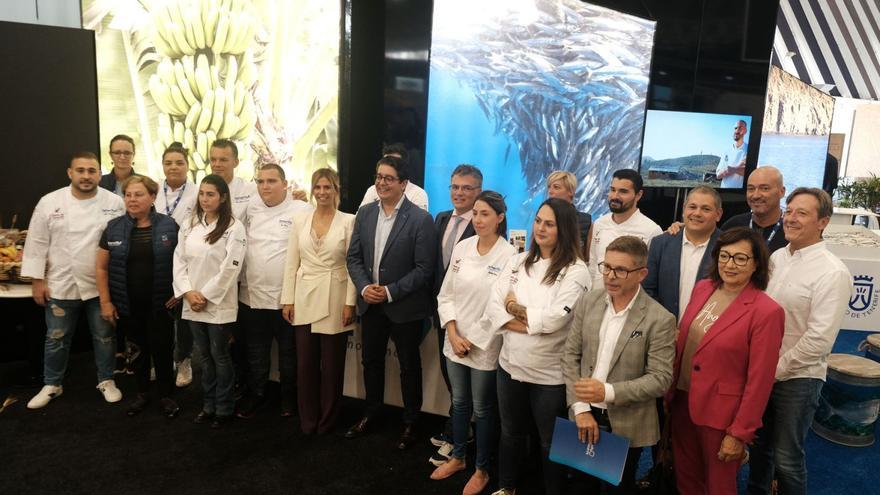 Tenerife will be the only island that will attend the 24th edition of San Sebastián Gastronomika, which will take place from October 3 to 5 at the Kursaal Palace in the capital of San Sebastian. In one of the largest assemblies of the event, the Island will participate with a 200-square-meter restaurant stand and with an ambitious program of breakfasts, lunches, snacks, workshops and themed tastings, which will make it possible to publicize the most emblematic products of the primary sector Tenerife and its gastronomy. Annex to the stand will also be the wine tunnel, in which the production of the six appellations of origin will be present.

The President of the Council, Peter Martin, highlights the importance of the event to “make known outside our borders, and through our chefs, the quality and diversity of the local product and the cuisine that we have in Tenerife as an attraction for tourists and an opportunity for we live here.” The objective is “that when talking about the Tenerife brand, they not only refer to the magnificent accommodation plan or the beaches and natural spaces that the Island offers. We are also an ideal place to come to taste and enjoy the gastronomy, with more than 4,000 restaurants. That commitment is what leads us to participate in San Sebastián Gastronómika».

The island councilor for Agriculture, Livestock and Fisheries, Javier Parrilla, alludes to the fact that “the purpose is to move the universe from Tenerife to San Sebastián through a careful menu, prepared by the team headed by Juan Carlos Clemente”. In this forum “we will talk about our wines, with 69 references and more than 300 bottles, but also about the diversity of products that make up our primary sector, such as honey, fresh meat from Tenerife or artisanal fishing, and tropical fruit and the sweets made with it.

The insular director of Tourism, Laura Castro, defends that “Tourism favors rural development. For this reason, with the combination of the primary sector and tourism, we want to position ourselves through events like this.” She is convinced that tourism diversifies the economy of rural environments, because “travelers want security, enjoy home-cooked meals, learn about history and culture or buy local crafts.” Along these lines, he reports that in this edition of San Sebastián Gastronómica “we will value the diversity of the destination based on rural areas, supporting the product and local companies and professionals, favoring the protection of the natural and cultural heritage and making it known to through gastronomy and wine”.

In this context, David Pérez, CEO of Tenerife Tourism, establishes that “gastronomy is a factor of inspiration and loyalty of travelers to our destination”. He emphasizes that Tenerife is the gastronomic destination that will have the largest space in the Kursaal, which it attends with the same stand as last year with some improvements “and an intense program”.

The program is designed according to the geography, orography, climates and traditions of the Island. In this way, the harvest, the stars and the volcanoes make up the story of this edition, with which it is intended to continue arousing emotions. As a novelty, on Tuesday the Tenerife space will be the official dining room for chefs, journalists and personalities from around the world in the VIP room of the congress. It will offer its best products, preparations and wines throughout the day.

Within the planned agenda, the great inaugural wine tasting stands out, directed by the Master of Wine (MW) Pedro Ballesteros, in which special emphasis will be placed on the black listán, a unique grape variety in the Canary Islands.

The council It will also launch the II National Dessert Contest with tropical fruits from Tenerife, in which six chefs from all over Spain will compete to prepare the best dessert. This year, mango and manga will be the protagonists, but there will also be room for banana, papaya, tropical pineapple, passion fruit and guava.

Another notable element of the program is the keynote speech dedicated to the new sweet cuisine of Tenerife, which will feature two avant-garde chefs: Laura Suárez (Tonka Bean) and Jesús Camacho (Donaire), who will present unpublished and avant-garde preparations live, based on of fruits and vegetables.

The Cabildo highlights, finally, that the Tenerife stand will have the presence and participation of students and teachers from the Hospitality and Tourism training cycles from the La Candelaria and Punta Larga High Schools. They will travel to the capital of San Sebastian with the aim of having their first professional experience.

The best vaccine against COVID: a good stew in La Orotava