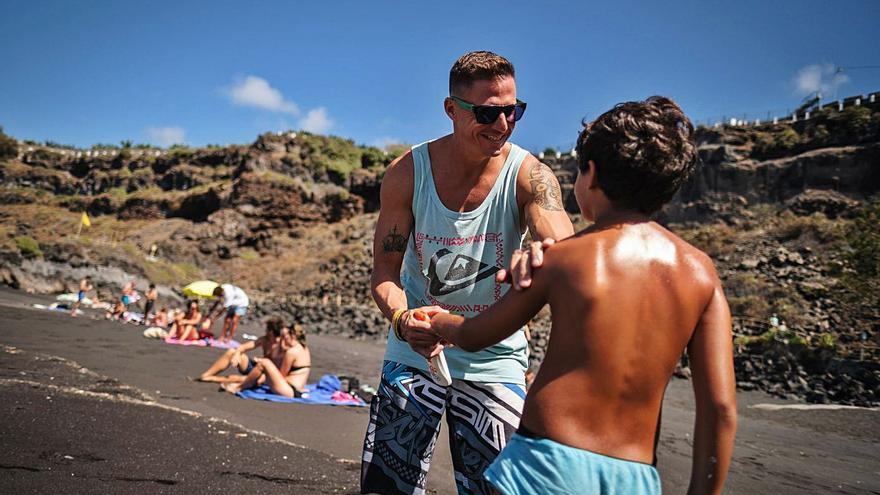 The Villa de La Orotava recovered Bollullo beach yesterday afternoon, the most visited bathing area in the municipality, which had been closed since July 2 due to landslides and subsequent safety improvement works. The City Council of La Orotava has already invested around 130,000 euros in this action, which will continue for several more weeks, so while the works last, access will remain closed from Monday to Friday until 3:00 p.m. On Saturdays and Sundays, you can enjoy the beach without time restrictions.

Customers at the Bollullo Beach chiringuito.

The town council announced on Friday morning that the Bollullo beach would be available again from three in the afternoon. Despite the waiting time, there was no avalanche of visitors and the vast majority of people who came to take a bath were unaware that it had even been closed. In the first hours after the reopening, only peninsular and foreign tourists arrived at the beach, who were surprised to learn that they had arrived on the right day and time.

A young man from Tenerife, who came to the beach with his girlfriend from Madrid, acknowledged that chance had allowed him “quite a triumph”, since he appeared on the beach just half an hour after it reopened, although he was unaware that it had been closed . Another family residing on the island chose by chance the afternoon of Friday, September 3, to show this beach to some friends from the peninsula. A few days or hours before, they would have missed the trip.

“We have noticed a lot”

Paulo was one of the first villagers to set foot on Bollullo beach after two months of closure. And he did have it prepared and planned: «Since I read that it was reopened, I organized myself to come with the children. There was already a lot of desire. Those of us who are regulars here have noticed it a lot this summer ».

With Los Patos beach officially closed since 2013, La Orotava has suffered an atypical summer between July 2 and September 3, with two of its three beaches closed. Only El Ancón has been available, which is precisely the furthest away and the one with the greatest lack of parking and services. After eight years without Los Patos, the closure of the Bollullo generated much concern among users, who feared that closures could be repeated as long as those caused by similar problems in the remote Socorro beach, which was closed for almost 10 months in 2010, or La Arena beach, in Tacoronte. The most feared example was that of the Santo Domingo beach, in the municipality of La Guancha, closed due to the risk of landslides since 2009 and still pending work to secure the slopes that have not been completed.

Julián also went down from the town of La Orotava to meet again with the busiest beach in the town. «I read it on social networks and I came with my daughter. She loves it, she doesn’t like another beach more than Bollullo. So we took the opportunity to come today and enjoy, “he explained. The day was spectacular and the low tide offered a lot of space to choose a location. The weekend is not expected to be so quiet in terms of the influx of bathers.

The first impression of the most common has not been bad, despite the fact that the protective meshes generate a certain visual impact, at least until the vegetation on the cliff recovers. “It seems that the wait has been worth it,” stressed Paulo, who sees “important to bet on safety” and considers the improvements to the access road and fence “welcome.” Julián thinks the same way and acknowledges that working on this beach “is very hard, since all the material has to be lowered on foot: cement, sand, water …”.

Chicho has been a lifeguard on the Bollullo beach for 32 years and in these two months he has continued to go down, only to the edge of the cliff, to collaborate in the surveillance and prevent people from accessing. He has had a bad time in that work and yesterday he celebrated that his beach has finally returned to normal. After three decades, Chicho admits that he has not seen too many important landslides in the area: “There will have been four or five times and the rocks have never fallen to the sand area. Some of the stones that can be seen now arrived during the controlled landslides that were made during the works, with the help of levers. However, he understands the concern of the municipal authorities: “I understand them perfectly because a stone that falls and causes some damage to someone can generate a problem as serious as that of Los Gigantes.”

Yesterday ended a shutdown that began with the fall of several rocks on July 2. After inspecting the area, La Orotava City Council technicians recommended the closure and declared the emergency of the work to secure the cliff. The Municipal Government Group (CC) has recalled that the beginning of the works occurred “just 48 hours after” the closure, despite the fact that it was necessary to have a company specialized in vertical work.

«From the first moment we have worked permanently in the area, with the aim of opening the beach as soon as possible. However, the complications of the terrain and the state of the cliff itself have meant that the work is extended in time, extending several weeks longer than the technicians had foreseen, ”acknowledges the municipal government. Now it is expected that the remaining jobs and the reduced Monday through Friday hours will only have to be maintained “for another month.”

The Orotavian City Council came to consider reopening the access to the beach in mid-August, but the idea was postponed until September 3 “as a result of the decision of the technicians to increase the area to be protected,” according to the Council.

The work on the access stairway to Los Patos beach, closed since July 2013, has been “about to resume” for several months, but the El Rincón Consortium, which is the entity in charge of its management, has not succeeded in making it happen. start up. After the payment of the pending certifications and a compensation of 50,000 euros to the winning company was approved, it seemed that it would be resumed this summer. However, this action, budgeted at more than 500,000 euros, was paralyzed in March 2020 and has not been reactivated.

The long wait for Los Patos

At the end of May, the El Rincón Consortium finalized the agreement and the payments to unblock the work, but more than three months later, the workers have not returned to the area. After nine summers in a row without a ladder, in the Villa they hope that the reopening of Los Patos may arrive in the summer of 2022. A desire that is now being questioned again. The pending works will take about six more months. At least the Bollullo beach is available again.

Dolores, a regular user of the Bollullo beach, regrets that during the execution of the works she was not used to remove the accumulated garbage in some parts of the cliff. “Part of the vegetation has been removed but under the protective mesh you can see bottles and other remains of plastic waste. It is a pity that when they removed the weeds they did not take advantage of it to also take those residues “, he criticizes. In his opinion, “it is regrettable that such an expensive and laborious intervention did not take into account the importance of keeping the area cleaner.” | RS

The closure of Bollullo Beach has also generated a negative economic impact on businesses such as the Bollullo Beach restaurant and beach bar, which have seen their peak season plummet. On the beach they have lost the best two months of the year and in the restaurant the loss of customers has been around 50%. With the beach closed, few venture down the narrow, dilapidated road, so these businesses have seen their best months turn into “a bad winter.” | RS

Pinolere gambles his future at the fair