First municipality in the region to implement the consumption voucher 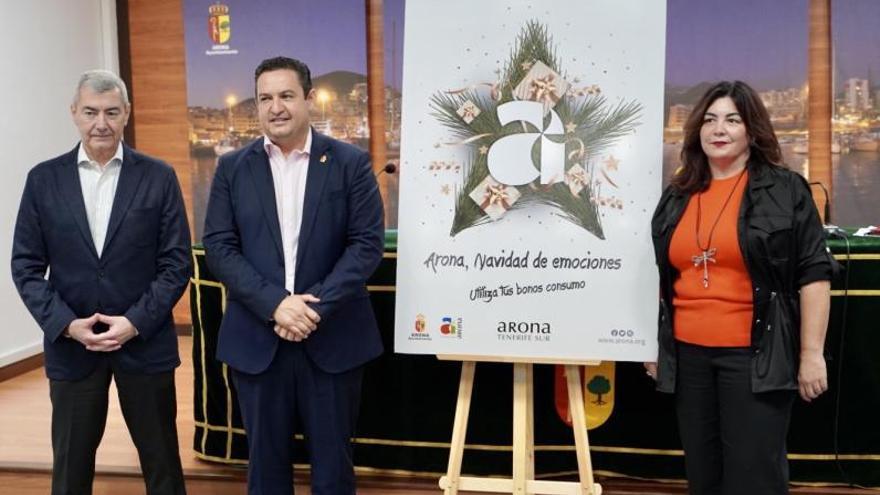 Arona debuts Christmas being the first municipality in the South region to implement the consumer bond system, through which the City Council will make it easier for residents to double the value of the purchases they make in establishments adhering to the program. In the next few days the period for the registration of businesses will open and, from December 13, consumers will be able to buy vouchers. All this through www.yocomproenarona.com, a portal that will have a link from the municipal website.

This was explained by the mayor, José Julián Mena; the councilor for the Economic Promotion area, Raquel García, and the president of the Federation of Urban Areas of Canary Islands (Fauca), Abbas Moujir. The presentation of the initiative was attended by representatives of the three zones and commercial areas of the municipality.

The investment in this program amounts to 150,000 euros, with which 5,200 vouchers are made available to customers. Each one can acquire six vouchers of 20 euros. That is, an expense of 120 euros per person to buy the equivalent of 240 euros. Each Arona business will be able to accept sales for a total of 100 vouchers.

José Julián Mena stressed that “we have gone as far as possible in support of the commercial sector and our neighbors in the last three years, since the start of the crisis. We have allocated 2.6 million euros to inject liquidity to small and medium-sized companies, the self-employed and sectors such as taxis, fishing or agriculture. The aronero councilor explained that “this campaign seeks to stimulate consumption on key dates and help the group of neighbors to make their purchases in a more affordable way.” Mena stressed that “it is essential to buy in Arona so that the wealth generated in the municipality stays here.”

For her part, the councilor Raquel García stressed that this initiative is being launched hand in hand with the Federation of Urban Areas of the Canary Islands (Fauca) and the commercial zones and areas of the municipality, with which she held various meetings for the design of the bell.

The president of Fauca valued the work of the Consistory: «The initiatives that it has developed in recent years in favor of the commercial fabric say a lot positively about Arona, in the same way that it says a lot that it is the first municipality in the South region in activating the consumer bonds initiative”.

Although the consumption bonus will be the element around which the Arona Christmas campaign will revolve, the lighting of the different centers will be switched on today. It will begin in Los Cristianos at 6:00 p.m., while at 7:00 p.m. the official lighting will take place in Valle San Lorenzo, while at 7:45 p.m. it will be in El Fraile and at 8:30 p.m. the event will culminate in The cookies. All this accompanied by the neighbors and by animated parades.

In addition, the traditional event Afternoons of chestnuts, sweets and wine, in Valle San Lorenzo, It will be held until Sunday, with roasted chestnuts, children’s workshops, a photo booth, children’s activities and the Farmer’s Market. It coincides with the Ruta de la Tapa until Saturday.

As for the commercially most prominent days, Arona raises December 16, in Los Cristianos; on December 22, in Las Galletas, and on December 23, in Valle San Lorenzo. During these three days, commercial revitalization activities and events will take place in which both the commercial zones and areas and various municipal areas have worked together, ranging from Culture to Economic Promotion, through Sports and Senior Citizens.

In total, Arona has programmed more than sixty acts and events during these Christmas holidays, including the Three Kings Parade itself, which will take place on January 5th.

The old Teide sanatorium disappears to comply with regulations on landscape