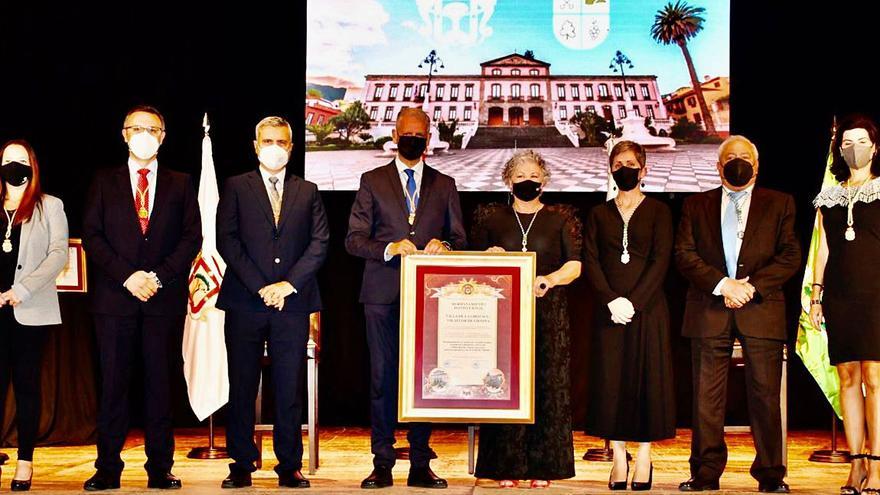 La Orotava and Vilaflor are now two officially twinned towns. Distant towns, one to the South and the other to the North, but linked for centuries through the historic Camino Real de Chasna. The Teobaldo Power Auditorium yesterday hosted the institutional twinning act, which will soon be replicated in Vilaflor, which strengthens the ties forged over centuries of movement around the summit, since the times of the Abona and Taoro menceyatos.

In a simple and emotional act, the mayor of Vilaflor, Agustina Beltrán (PSOE), stressed that both corporations feel “they have the duty to perpetuate that link between the two peoples”, which in the 16th and 17th centuries forced these neighbors from the South to travel to the Villa to resolve basic issues with the administration and justice. For the president of Orotava, Francisco Linares (CC), this twinning is an act of respect for what has united both peoples “for more than 500 years, in the Hispanic and also in the pre-Hispanic stages.”

Are two towns linked by a path that crosses the summit, now a path for athletes and pilgrims who travel from North to South out of devotion to Saint Hermano Pedro and the Virgin of Candelaria. In the past, a cattle and commercial route that maintained economic and sentimental ties, in the form of marriages that emerged as a result of that way of meeting and exchange, now included in the network of trails of the Island Council.

This institutional union has been possible thanks to an initiative of the PSOE villero, in 2017, which was welcomed with enthusiasm by both local corporations and which was reflected, after detailing the historical, cultural and social arguments, in the plenary agreements of the 14th of June 2021.

The City Council recalls that «the main foundation of this twinning is in the connection through the Camino Real de Chasna, a historical route that has been connecting the northern and southern regions of the island for more than 500 years, and that it was a commercial, territorial, bureaucratic, social and cultural communication channel. This route was initially used by the island natives for the transhumance of cattle, crossing the lands that today form the Teide National Park, the old ravines. After the Castilian conquest and until the first decades of the seventeenth century, a great administrative link was generated, since Vilaflor depended on the Orotavense judicial party, so the residents of Vilaflor de Chasna had to travel to La Orotava, through the summit , in order to resolve your legal or administrative matters. This Camino Real de Chasna was also essential for the commercial and social relations between the two peoples in later centuries.

The way was, in addition, «A true laboratory of scientific experimentation since the century. XVIII ». Naturalists, scientists and travelers wrote many of their observations and conclusions in numerous works for which the journey between Vilaflor and La Orotava offered “fundamental contributions”.

The socioeconomic evolution experienced by the island from the 20th century and the culmination in 1947 of the road that connects La Orotava with Vilaflor through Las Cañadas del Teide led to the abandonment of this royal road as the main communication artery between the North and the South. Perpetuating their memory and guaranteeing its preservation are two objectives shared by these twinned peoples.

Linares immediately recalled the key figure of a former mayor of the city, so closely linked to Vilaflor that he was named Adoptive Son. This is the lawyer Agustín Hernández Hernández, appointed mayor in 1910, 1916, 1922 and 1934, and creator in 1909 of a historical event that will be remembered soon: the visit of the La Orotava Music Band to the town of Vilaflor, on the occasion of the festivities of San Agustín and San Roque. The musicians then traveled on mules, and Linares promised to bring them back. “This time they will not go on mules to the summit, but they will return to Vilaflor,” he announced.

That visit by the villera band enjoyed a great reception from the residents of Vilaflor de Chasna, which was reflected in the press of the time. It was thanks to Agustín Hernández Hernández, a politician who owes projects such as the provision of a public drinking water network with public jets, the foundation of the first Municipal Academy of Drawing or the promotion of the Mancomunidad del Valle de La Orotava. During their governments, in 1910, 1916-1917, 1922-1923 and 1934-1935, the kiosk in the Plaza de La Constitución was built and the Plaza de San Juan, in Villa de Arriba, was remodeled. In Vilaflor de Chasna they not only named him adopted son, they also gave him a replica of the baton and marked a street in his honor.

A pizza from La Laguna, chosen among the best 30 pizzas in the world

Survey: Do you think it is necessary for Health to prepare an offensive against the anti-vaccines?

Wounded after falling down a ravine in Guía de Isora

The La Palma volcano destroys more than 720 buildings, 605 of them homes, according to data from the Cadastre

Santiago del Teide extends the hours of municipal cemeteries for the celebration of All Saints and...