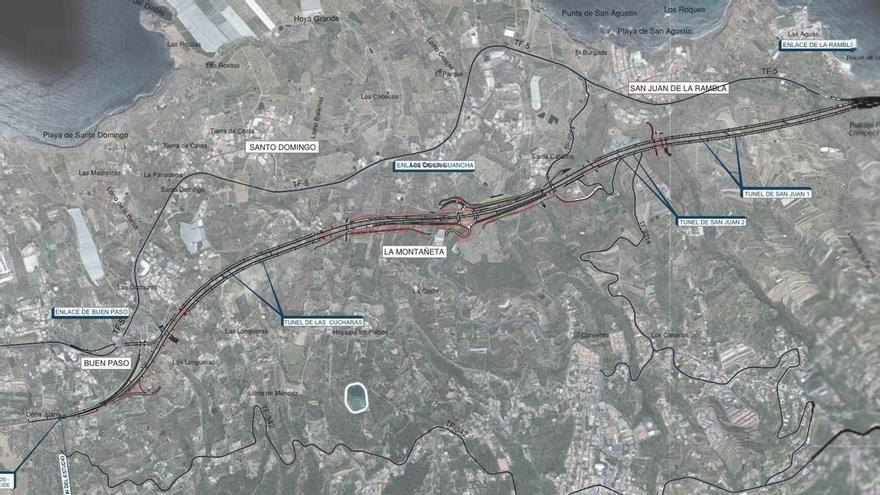 The Ministry of Ecological Transition, Fight against Climate Change and Territorial Planning of the Government of the Canary Islandsthrough the Environmental Assessment Commissionhas given its approval to the Environmental Impact Statement (DIA) of the layout and construction project of the closure of the Island Ring between San Juan de la Rambla and the Buen Paso roundaboutin Icod of the Wines. This is a key advance for island mobility that will allow this work of 175 million euros to be tendered in 2023. The island president, Pedro Martin (PSOE)showed this Tuesday, January 24, 2023 his satisfaction with this procedure and guaranteed that the work can be started “before the end of the year”.

It is a new dual carriageway, which will have four lanesand what will happen south of current TF-5. The project for this section is written since 2007 and its updating was contracted by the regional Council at the beginning of 2021. In November 2022 it went on public display and 14 months later, the environmental impact statement has already been approved.

Peter Martin highlighted the importance of this environmental approval which, together with the draft the ring road of La Laguna (from Guamasa), “they give us the guarantee that, once all the obstacles, studies and necessary evaluations have been overcome, the work will be able to go out to competition this year.” In his opinion, it is two key actions to begin to unclog the Northern highway (TF-5) and reduce the queues that have been suffered on this road for more than three decades.

“Projects that did not exist”

The First Vice President and Island Councilor for Highways and Mobility, Enrique Arriaga (Cs)also said this Tuesday that “during this mandate we have managed to draft important projects that did not exist and obtain the indispensable and complicated environmental impact statements. In this way, we managed to prepare the procedures to tender, now yes, the works of important infrastructures that will help to improve mobility in Tenerife». For Arriaga, the Island Ring It is “one of those fundamental ways that will improve the quality of life of the people of Tenerife and improve the economic flows of those who live in the North.”

this performance between San Juan de la Rambla and Icod It will not have major effects on traffic, since practically the entire route is newly built. It will run further from the sea than the current TF-5 and it will have three sections of tunnel, the total cost of which exceeds 48 million euros. The longest tunnel, located at the beginning of the route to avoid a protected space and the ramblero town, measures about 975 meters. There is another of 320 meters, which comes out of the Las Monjas ravine, and a third of 826 meters, in Las Cucharas.

The new road, which crosses the municipality of La Guancha, it will actually be a double track, with two lanes for each direction of movement and with independent tunnels. The old layout of the TF-5 will continue to be available as an alternative. In addition, it will solve historical deficiencies of the guanchera town, such as having safe access for all types of vehicles from the TF-5. The great connection that the project foresees, above Las Crucitas, will make it possible to forget about the dangerous crossing of the TF-5 with the TF-352, through the ascent to the Insular Solid Waste Plant (PIRS). This new road and a safer access will also serve to make the project of the La Yegua industrial estatepending development since 2001.

The work between San Juan de la Rambla and Icod It will allow the closure of the Tenerife Island Ring to the North to continue, since it will connect to the east with the current highway between San Juan de La Rambla and Los Realejosand with the stretch already in use between Icod and the Tank, for the west area. Ring closure is currently running between El Tanque and Santiago del Teidethe largest project carried out by the Canary Islands Government, with an investment of 240 million euros and the longest tunnel in the Archipelago, of 5.1 kilometers long.

The investment planned for the closure of the Island Ring between San Juan de la Rambla and the Buen Paso roundabout, in the municipality of Icod de los Vinos, is around 175 million euros.

Public Works has calculated that the entry into service of the section between Santiago del Teide and El Tanque will attract a daily average of 28,000 vehicles from the North to the South.

When the section of the ring between San Juan de la Rambla, La Guancha and Buen Paso is underway, Only the project for the most complicated area will remain pending, the approximately seven kilometers that separate the end of the TF-5 highway in Los Realejos from the nucleus of Las Aguas, in San Juan de la Rambla. In 2001, the Government of the Canary Islands published the Special Territorial Plan and Informative Study of the Northern Island Corridor, which considered ten alternatives to extend the Northern highway from the San Vicente realejera area. The chosen alternative, with a road over viaducts and a huge bridge in the Ruiz ravine, had a great environmental impact and garnered a legion of detractors. Nor was it very respectful of the urban centers of San Agustín and San Vicente, which is why it also accumulated opponents in Los Realejos. It received 13,812 allegations against it and it was discarded. Nowadays, The Canarian Government and the Cabildo finalize a new, more respectful project with the environment and landscape.

The Canarian Government indicates that this favorable environmental declaration of the penultimate section of the Insular Ring will be published in the coming days at the Official Gazette of the Canary Islands (BOC) And it arrives “after carrying out the pertinent public information and consultation procedure to all affected administrations and people involved and after collecting all the mandatory reports from the different services to be consulted”. Among its conditions, it is established that “a study of the air quality in pre-operational states must be carried out, as a starting point and a comparison with the situations that occur in the construction and operation phases”. Regarding noise pollutionfor all the phases in which the project is divided, a noise measurement point must be added to those already proposed and additional documentation for the monitoring and control of possible sound effects.

Once the construction project of the future highway is defined, including all the detailed and precise information of the final action, “it will be in a position to prepare an annex of environmental restoration and landscape integration, which must include the considerations and conditions provided by the different public administrations that have informed about it”, adds the Regional Council for Ecological Transition, Fight against Climate Change and Territorial Planninghe.

The DIA also points out that “prior to the start of the works and during the verification phase of the stakeout, it must be carried out by a professional with a technical profile specializing in flora and fauna of the Canary Islands, new surveys and inventories of vegetation and flora, as well as birds and bats for the entire route of the future road. In addition, an Environmental Surveillance Program is incorporated.

In the same Environmental Assessment Commissionheld this Tuesday, the DIA of the project to modify the update of the section of the Insular Ring between El Tanque and Santiago del Teidealso promoted by the Department of Public Works of the Government of the Canary Islands.

Bus lines 916 and 917 will also serve Anaga on weekends

The mythical pools of Los Silos wake up with dead fish