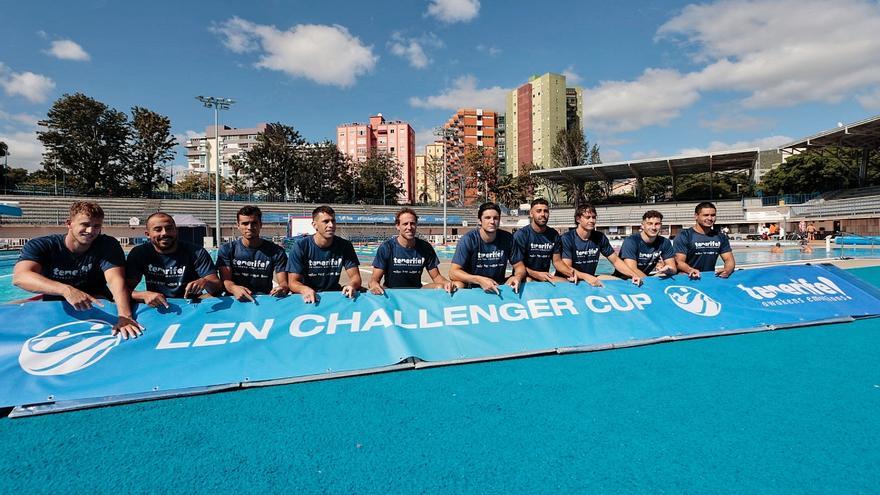 Wednesday, January 24, 2023 will be recorded in the history of Tenerife echeyde for his journey in the difficult and complicated world of water polo, and that is that he receives the Slovak SKP Kosice in the swimming pool Acidalio Lorenzo (8:15 p.m.) in the knockout match for the quarterfinals of the LEN Challenger Cup.

This afternoon will be a unique event, the opportunity in round-trip matches (the latter will be held on February 8 in Slovakia) that will determine if the chicharreros are semifinalists in a major European competition, an impressive achievement that would certify the growth experienced by the people of Tenerife during the three last seasons.

First was the LEN Eurocup in September, where the capitalists despite competing did not get any victory. That previous competition made them play later, and after being eliminated, the first group stage of the LEN Challenger Cup where Tenerife Echeyde, framed in Group A, brilliantly went to the quarterfinals by beating their three opponents: the Greek Ydraikos (13-10), Slovakian Novaky (12-9) and the powerful Turkish Galatasaray (15-11), one of the coconuts of the competition. It also happened that it was the so-called group of death… But not for chicharreros.

Now it’s time to experience another decisive moment, “the first we hope will be that of many others”, which comes at a very good sporting moment for the team, especially considering that Echeyde has just won CE Mediterrani in their local competition (9- 8) in a duel of power to power.

That is the global conviction of the entire structure of the club, which yesterday organized a special half day as a prelude to the sporting event at the capital’s swimming pool where the media were able to live together and feel the sensations of a group that wants to progress and which a few years ago no one believed they could reach. “I have an anecdote, when we first went up to the Division of Honor, an old manager told me, presi, in five years we would be in Europe… Well, look, in five seasons we are already in Europe”, explains the team’s president, David Rivas, with great pride.

It’s not little. Echeyde has before them the opportunity to become big and compete for a bigger prize, but everything depends on beating SKP Kosice this afternoon, and if possible, by as many goals as possible to go to the match on 8 February, already in Slovakia, to ensure their pass to the much-awaited semifinals of the Challenger. That is the premise but in no case will it be simple.

The coach-player of the team, Albert Spanishhe does not hesitate to point out that “it is the most important game in the history of Echeyde to this day and we hope that history will be more favorable later and that we will have more games of this type. It is also true of Canarian water polo because it is the first team to sneak into the quarterfinals of a European competition. So, tomorrow (for today) is a historic day for water polo and Canarian sports”.

He indicates that “we arrived physically well. We have been working hard and the victory against Mediterrani was important, a historic team as well. It gives us encouragement and energy to face the match in the best possible way”.

“Kosice is a tough opponent, we are in the quarterfinals and here are the best eight, each more complicated. They have two very strong buoys and two very good pitchers… They are a fairly complete team and we are adapting the tactics to their characteristics. The key will be to be able to tackle their inside game and set a very high game pace”, added the coach.

The winger-extreme Pablo Díaz explains that the rival “is complicated but we face it with all the desire and to the fullest. This for a man from Tenerife is a rush and a privilege because arriving requires an effort and an award that belongs to all the Tenerife residents of the club and the youth academy in general”.

For the team’s goalkeeper, Diego Malnero, the clash “is very exciting, for the club, the city and obviously for us. We face it with great enthusiasm, a lot of desire and highly motivated after the good start of 2023. It will be a tough match, like any other in European competition. Now there is a very difficult month left, but a nice one because what we like is to play and compete”.

The Dutch buoy Mees Keuning warns that “it is a very complicated game and in fact it is second in its national league. I think the clash will be very hard and very physical. I think we got there well.

The captain of Tenerife Echeyde, Nacho Gutíerrez, highlights that “what is mainly expected is to compete and enjoy the experience because in the end we don’t know when all this can be repeated. We are very excited and we are going for the victory”.

Nacho precisely sums up what the Echeyde players expect from this afternoon’s game.

Loro Parque is involved in the conservation of Canarian biodiversity

The municipalities of Tenerife are close to the outstanding in transparency

eight days of love and heartbreak in Tenerife