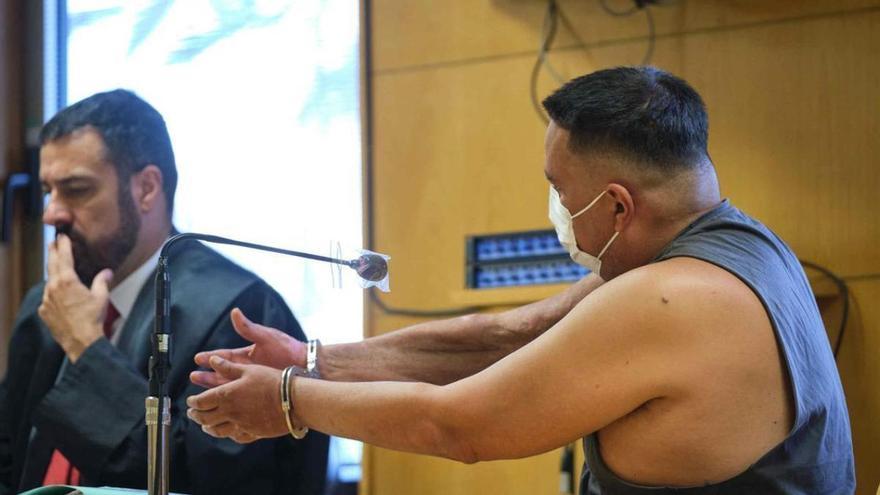 The alleged partner of the man accused of murdering this woman after set it on fire at the end of 2020 in La Laguna he suffered “great suffering,” of which he was largely aware.

The Burnsdeep second and third degree, were located mainly in the thorax and back, although they affected 85% of her body, they reached the bones and are the cause of her death twelve hours later in a hospital, where she was induced into a coma from the moment of admission.

The jury trial that is held in the Court of Santa Cruz de Tenerife to clarify what happened in the early morning of that September 23, has focused today, Wednesday, on the analyzes of the experts and technicians.

The forensics They pointed out that the woman, just over five feet tall and weighing 55 kilos, suffered heat injuries to all organs, from the tongue to the liver, heart and lungs. It is therefore impossible to determine where the shock began: as the skin disappeared from the heat, the victim lost all fluids and became dehydrated.

The presence of toxic productsbeyond traces of tranquilizers, and the wounds on the corpse are compatible with having offered resistance, although the suspect in the crime had no injuries.

The psychiatrists Those who analyzed the defendant confirm that he suffers from a personality disorder, has attempted suicide on at least one occasion and his character is depressive. Although he is prone to aggressiveness, he has a manipulative, aggressive character and a distorted conception of himself and the world, he knows how to distinguish between what is right and wrong, the experts say.

Their medical history It states that he was a regular consumer of alcohol, cannabis, tranquilizer pills and cocaine and that he once tried to detoxify but only succeeded for a while.

The police officers who arrived at the house around five in the morning observed that the house had no electricity, was very dirty and smelled of smoke. What most caught their attention was the gasoline generator set used to illuminate it and three drums full of 10 liters of this product and another one with about four liters. The ceiling and part of the tiles in the bathroom were blackened and there were plastic residues in the bathtub.

Everything points to the fact that the events were unleashed at the entrance to the bathroom, where the burned cap of a drum, a machete almost 60 centimeters long, and remains of having located the fire were also found. In factthe first agents went to the place thinking that it was an accident caused by a fire.

In the morning, agents specialized in this type of mishap appeared and also observed a general disorder, extreme dirt, urine, food remains, candles and gasoline cans, one of them without a cap. They also agree that the fire it originated at the entrance to the bathroom, not in the bathtub, as was believed, and some kind of accelerator was used, most likely gasoline, but they are unable to determine exactly how much, only that it must have been “quite a lot.”

The way to start it was probably a lighter, perhaps one of the several that were in the living room and kitchen. The origin was located at a height of one and a half meters, practically what the victim measured, although not from the head.

The biologists found no traces of alcohol in the woman’s body, probably due to the time that had elapsed. What they did find were tranquilizers for therapeutic use and ketamine, which apart from being used as a drug also serves as an anesthetic.

The experts from the National Toxicology Service found in the nails of the victim DNA which has a 2.5 trillion chance of being the suspect. Samples taken from the woman’s clothing had traces of gasoline.

The trial will enter its penultimate day tomorrow with the reading of the final reports of the Prosecutor’s Office and the three prosecution lawyers, who maintain their requests for a 25-year prison sentence and compensation of 150,000 for each of the victim’s two daughters. .

The defense will insist that he is innocent, but his lawyer acknowledges that he does so because of the story that the defendant made the first day and that he himself was unaware of. He will try not to take into account the aggravating factors of kinship and gender violence.

The fire in Tenerife continues without control and already affects 2,700 hectares

Rodríguez Fraga, mayor of Adeje (Tenerife), new president of the Alliance of Tourist Municipalities of Spain

Gutiérrez is re-elected secretary of the PSOE with 98% support