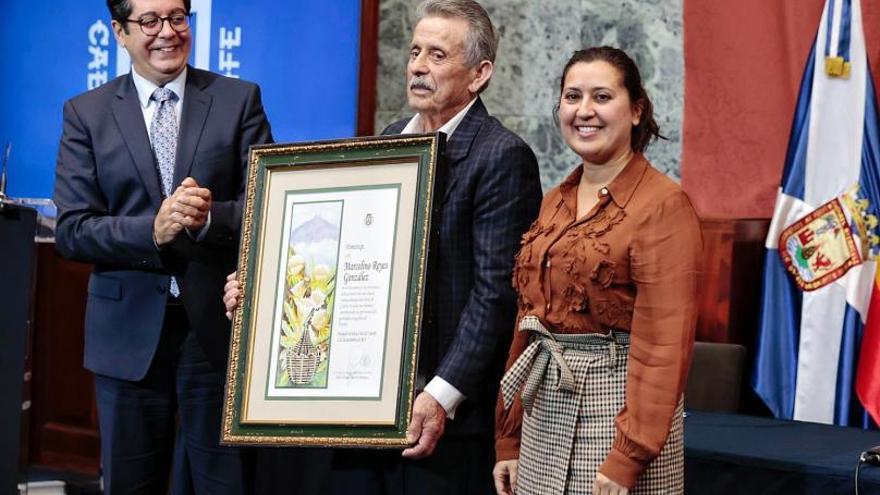 The Cabildo personalizes the annual tribute, in his day, to the crafts of the Island in the basket-maker Marcelino Reyes González. The winner receives the distinction as usual with the support of his family and friends, “for contributing to maintaining the ethnographic heritage of Tenerife». The insular president, Pedro Martín, and the Minister of Employment, Socioeconomic Development and Foreign Action, Carmen Luz Baso, chaired the commemorative act in the Noble Hall that recognizes the importance of this trade in the preservation of Tenerife culture. The work of Marcelino Reyes is key to keeping alive one of the artisan trades that are at risk of disappearing.

Also participating in the act island director of Socioeconomic Development, Ermitas Moreira, in addition to other island authorities and representatives of the municipalities of La Guancha and San Juan de la Rambla, as well as artisans from the Island.

Linked in another time to activities typical of rural areas, the continuity of basketry is at risk as a consequence of the social, economic and cultural changes that have occurred in Canary Islands since the seventies of the last century.

Pedro Martín pointed out that the recognition of Marcelino is also a tribute to artisans and artisans, in general, for their “consistency and effort in the face of a society that unfortunately gives little value to artisans.” He refers to the current custom that “the acquisition of goods is something to use and throw away and does not remain over time.”

The president considers the honoree as “an advance who, despite the fact that he was frowned upon, even dedicated himself to doing openwork and embroidery, in a society in which explaining certain things was very complicated.” He adds that “the Cabildo de Tenerife recognizes his efforts, that he continues not only to make baskets but to continue working on training and transmitting knowledge.” Martín concludes: «Craftsmanship depends not only on people committed to the trade but also on the ability to transfer their art to those who will come later».

Carmen Luz Baso adds that “people like Marcelino Reyes have managed to enrich the basket-making catalog by rescuing multiple shapes that are already in disuse in their desire for the survival of the trade.” She emphasizes that she “turns the basket into a beautiful object as well as a useful one today.”

“I have put all my love”

After receiving the distinction, Marcelino Reyes points out that “I have put all my love into this profession, and until I die I will be taking care of our basketry.”

The honoree was very moved and his voice cracked as he thanked the island institution, the San Juan de la Rambla and La Guancha Town Halls and all those present for supporting him and his work.

Born in the hardest years of the post-war period, in San Juan de la Rambla, Marcelino Reyes learned two traditional trades from his father: carpentry and basketry. Starting in the 1970s, he turned to the second and taught it in its multiple variants, that of rods, wicker, cane or pole.

In his career as a teacher, he has known how to combine his love for this profession with the knowledge, respect and care of the island forest that supplies them with the necessary raw material. In addition to good work through a refined basket technique that, as he himself admits, he has been perfecting over time.

Marcelino has visited fairs and meetings on the islands and abroad, as well as collecting distinctions and awards. In 1988 he was awarded the Government of the Canary Islands with the 2nd Prize for Crafts for Personal Use and in 2009 he received the Master Craftsman card, by the General Directorate of Industry and the Tenerife Rural Prize in the category of Conservation of agricultural heritage and rural traditions.

To his extensive career, and his respectable reputation in the artisan world, is added his participation in the qualifying court for the tests to obtain the Tenerife artisan card.

The commemorative act also includes a performance by Candelaria González (voice) and Francisco González (guitar), as well as a small sample of the different types of basketry made by the master Marcelino Reyes.

The Cabildo de Tenerife improves the rural road of La Represa, in Aguamansa

More than 40,000 cruise passengers begin the year of recovery in the Port of Santa Cruz de Tenerife

The sculpture of Father Anchieta changes its site tomorrow

The town of San Andrés, in Santa Cruz, becomes the center of traditions

The town of San Andrés hosted yesterday the celebration of the Anaga Traditions Day, organized by the...