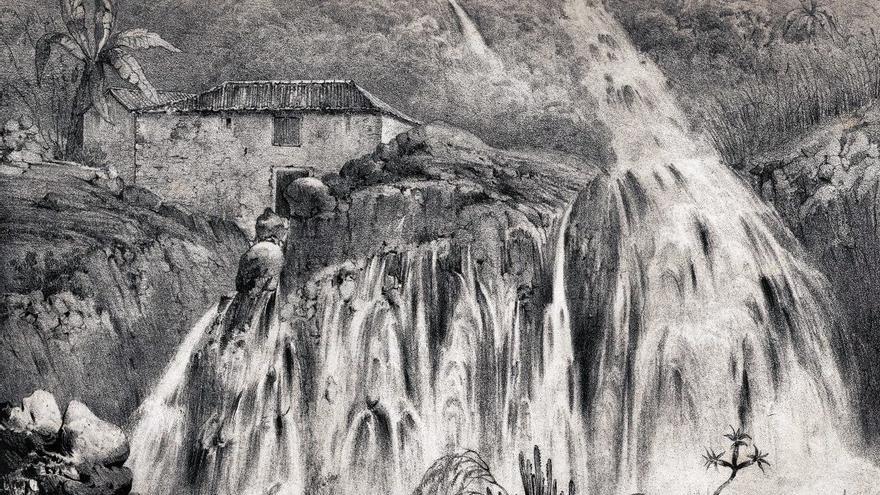 The call San Florencio Storm, also known as the Alluvium, snatched lives, houses, animals and the future of many Canarian families. More than 21 towns in the north of Tenerife suffered the consequences of what today is remembered as the worst meteorological disaster on the Island since records began.

More than 200 people lost their lives on this day, on the night of November 7-8. The municipalities affected by these heavy rains were Puerto de la Cruz, with 32 victims; The Villa de la Orotava, with 104; the high Realejo, with 25 people; the lower Realejo, with 14; La Guancha left 52 deceased; San Juan de la Rambla, 10; Icod de los Vinos, five and Santa Úrsula, one. This leaves a total of 243 people, however, there are different chronicles that collect that there were actually 293 victims of this incident.

Unfortunate events took place in each of the territories, one of which was the sinking of a frigate in Puerto de la Cruz, which caused 15 of the 19 crew members on the ship to die.

This meteorological event caused hundreds of human lives to come to an end, however, it also claimed that of animals. About 1,009 are those that the storm snatched, registering the maximum in La Villa de la Orotava, about 591.

A wedding cut short by the catastrophe

The Provincial Historical Archive of Santa Cruz de Tenerife, specifically the Zárate Cólican Archive, describes the ravages caused by the terrible storm almost 200 years ago. Stories and anecdotes are told of what those affected experienced that day. One of them describes how a young man from La Guancha saved her future wife and her parents, shortly after having the fatal outcome of being the victim of a flood caused by the storm. The bride, seeing what had happened, rushed into the water after him.

The forests were also protagonists, as the mountains of this northern municipality were overwhelmed by the waters that descended from Teide. Only a single pine tree remained standing. As they review, the ravine was divided into four arms, which meant that the inhabitants of the town were not so affected. “In this town there would not have been a living one”, collects the file.

Report of the event

Don Antonio Santiago Barrios, beneficiary of the parish of Santiago Apóstol, reviewed in 1944 what happened from the original copy that is archived in said parish.

As stated, the winters since 1820 had been very mild, with calm waters and mild summers. In 1824 there was a drought, so that in April and May the crops almost failed. At that time and by order of Bishop José Martinón, public prayers were held in all the parishes of the Archipelago “to implore the rains that the fields needed so much”. According to him, in May there were abundant harvests of wheat, millet, wine and potatoes.

In 1826, the year of the tragedy, hot weather had been experienced with very little rain. “Dawn came on the 7th, very dark, sad, full of clouds and making some wind. As their hours grew, the darkness increased,” says Antonio Santiago Barrios.

Noises were heard throughout the day, the inhabitants did not know the origin. Some said that it came from the sea, others that it was simply wind. Around one in the morning, lightning, strong winds and rains forced northerners to take refuge in their homes. At 10 in the morning of the next day they woke up thinking that the worst was over, however, this tragedy followed them until November 9 when the storm finally stopped. From then on, only the cries of those who had lost relatives, cattle, houses and even land were heard.

Havoc in the Realejo Bajo narrated by Antonio Barrios

“In this place there was a regular masonry bridge made of stone and lime, and its floor was made up of very strong torch beams, and its parapets were very decent; At the door of the source, on the upper part, a wall decorated the street, up to the parapets of the bridge, quite tastefully done, and on the lower part there were three houses, high and low, and on this same side, down from the ravine, there was a street that had four houses, and the last one below was the butcher’s shop, and a little further down was the house of the high and low Beltranes, with a large press on the west side of the bridge; On the upper side there was another large country house that almost reached the bridge; and all these nine houses and the bridge perished on the night of the alluvium from November 7 to 8, fourteen persons also perish with them. In this town and jurisdiction, no other event worthy of writing took place,” Antonio Santiago Barrios recounted.

“This town was one of the ones that suffered the most in the flood of the night of November 7th to 8th. Before this unfortunate night this town was, although small, very beautiful, and its inhabitants had taken great care in its cleanliness and it presented a very pleasant sight; it had a regular bridge at the entrance of the parish square, by its source; its streets were very well cobbled, and all of it. The public aspect was with the greatest cleanliness; moreover, the night of the flood everything was devastated as well as its town hall; It is stated in an act issued on November 30, 1826”, he explained.

“In addition to what is referred to in the minutes of that illustrious city council that was careful to leave written in its file what happened in that town on the sad and fateful night of November 7, in the Santa Catalina payment, where on November 25 Those neighbors celebrated with great pomp and joy the Virgin and Martyr Santa Catalina. This Hermitage was very neat; the image of the Saint was new and very tasteful and its square was covered by a beautiful grapevine, and on the night of November 7, a new ravine formed at the top or an arm of the ravine not even halfway that broke off from this one and that with much violence went down those cliffs took it away from its foundations, not leaving even a faint trace of it, and it was only possible to guess where it was by a very short piece of the parapet that divided the plaza from the road and that the waters left behind. the top of the square. I believe that Mr. Del Valle’s warehouse was taken here”, described the beneficiary of the parish.

For their part, two researchers from the University of La Laguna, José Bethencourt-González and Pedro Dorta Antequera, from the Geography Department, published a document in which they analyzed and compared this event with the 2005 Delta.

They stressed that the “Storm of San Florencio” recorded incalculable damage. The count carried out by the researchers shows that, only on the island of Tenerife, more than 600 private houses were destroyed. Added to this is the damage caused to the mountains of the Islands, especially in agriculture, with soil losses that could exceed 30% in some areas. But they affirm that the greatest losses were recorded in human lives, since the sources consulted speak of “an infinite number of deaths” and “corpses floating” in the days after the storm, due to the drag produced by the imposing force of the ravines. . According to the count of the available documentation, only for the island of Tenerife there could have been 298 deaths, an amount that will probably increase with future research and with the data from the rest of the Islands.

The AEMET has recalled this Monday through Twitter this tragedy:

On the social network Twitter there is a very interesting thread developed by a profile that collects all the knowledge of the Tenerife chronicler José Agustín Álvarez Rixo, who died in 1883 and who left many and varied testimonies about the 19th century in the Canary Islands.

Here is the direct link to this thread:

Canary Islands go to pre-alert situation due to wind

The sea destroys the improvement of the Las Bajas road after 100,000 euros of investment