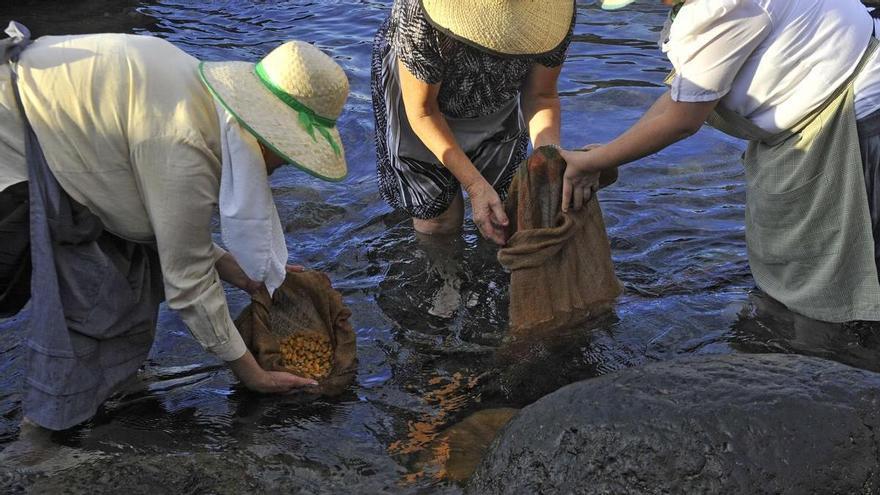 East Monday, October 3, 2022 returns the soaking of the chochos to San Juan de la Rambla. The ramblero Town Council and a small group of neighbors collaborate to recover this old tradition agricultural and gastronomic that every year was repeated in the puddles of The Rambla. Farmers no longer come down with their harvest of lupins to soak them in puddles of salt water, but the work of ramblero artisans Maria Dolores Santana and Marcelino Reyes Yes, it has allowed us to remember for years, until the pandemic stoppedthis activity with a representation of “one of the most iconic traditions of the town”, according to the local government (PSOE-AIS-CC).

With the aim of “informing the new generations of the customs that marked the day-to-day of yesteryear”, this Monday the the lost custom of soaking the chochos and men and women farmers of the time will be seen again “loading the sacks of the harvest of this legume to soak them and give them their characteristic salty touch.”

The Culture area, directed by Tomas Oramas (PSOE)makes it possible for Maria Dolores Santana and Marcelino Reyes re-enact “a custom that decades ago was very common”. Coinciding with the celebrations of the La Rambla neighborhood At the beginning of October, “dozens of farmers took advantage of the fact that they were walking to the festivities in honor of the Virgen del Rosario to soak the sacks filled with lupins in the puddles there. There they remained submerged for several days until they were suitable for consumption”, they recall.

Soaking the pussies before the pandemic Angel Hernandez

Oramas details that as of 4:30 p.m. this Monday, «this couple of artisans accompanied by neighbors, will stage how this custom was performed, with great detail. In this way, an act is recovered that, like so many, was paralyzed by the start of the Covid pandemic in 2020.

Almost all the families of San Juan de la Rambla They took their pussies to soak. Only the efforts of Santana and Reyes have made it possible for the tradition to be maintained in a testimonial way. In one of the last editions prior to the pandemic, in 2018, Santana recalled that “now we are more comfortable and no one goes down to the sea or spends several days waiting for the pussies. It is a laborious job because you have to put them in sacks, tie them, wedge them with stones and be careful not to wash them away with the tide”.

The cultivation of chochos is maintained in the localityalthough to a lesser extent than in the past, since they still use it for their own consumption and to fertilize and oxygenate the land in crop rotation processes.

The soaking time depended on taste, but before it was normal for several days. If they were soaked at home, with fresh and salt water, the process took more than a week and required constant water changes. A curiosity is that although the chochos are put in salt water, traditionally there was talk of “sweetening the pussies”because the salt removes the bitter taste of this legume.

Before reaching the puddles, the lupins must spend almost a year in the garden. When the pods dry, they are collected and beaten in the sun on a blanket. The grain must be winnowed later to remove all the husk. Then it is necessary to boil them for several hours, even if their destination is to feed animals, since if they are not cooked, they are very indigestible. Once cooked, they must be soaked in salt water.

The soaking of the chochos will be the previous to the also expected return of the Smoke Festival, another tradition recovered in 2011, in which dozens of neighbors, carrying axes and locks, descend the Risco de Las Pencas, on the slope of the Barranco Ruiz, until reaching the neighborhood of La Rambla, where the residents of the nucleus wait to start their parties. It will be next Saturday, October 8 in the afternoon.

150,000 euros of investment for childcare centers

Bet on the ‘Femete + Industrial’ project to get a job

ASG says that if there is talk of decentralization, the National Center of Volcanology should go to La Palma