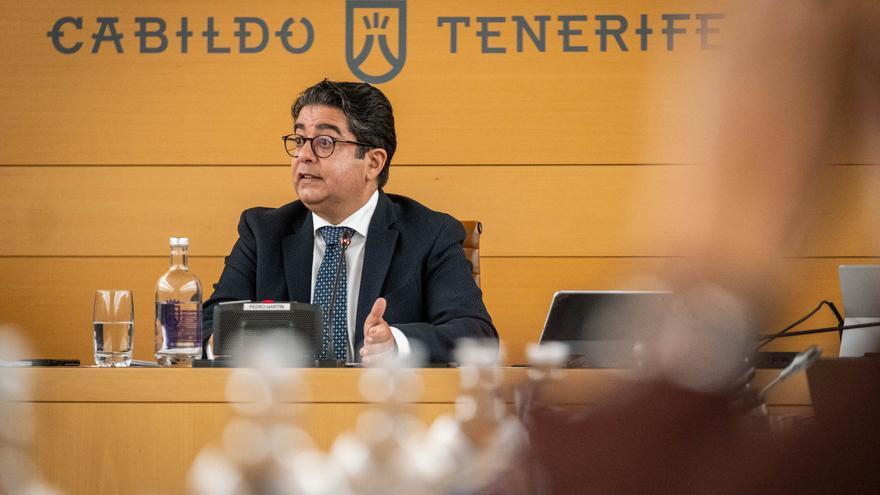 The President of the Council of TenerifePedro Martín, has defended this Friday the “agility” and speed of the corporation to intervene in the development of the Cuna del Alma urban project just 24 hours after receiving the complaint from a heritage association, although he has warned that paralyzing the works in its entirety, even in a precautionary way, would be an act of prevarication.

In an appearance before the Plenary in which three activists have been prevented from intervening because that is what is stated in the insular regulations endorsed by the secretary — security guards were even called and finally they explained their position to the groups at the end of the appearance during a break– has made a report on the historical processing of the project and recognized, among other things, the non-existence of an archaeological report in the area.

He has pointed out that the Cabildo promoted the precautionary stoppage of the works once the “serious damage” to the heritage became known –later it was partially lifted and now only affects 2% of the land– and it understands that the greatest competition is now in the hands of the General Directorate of Heritage of the Government of the Canary Islands, managed by Yes We Can, which so far has only opened a sanction file amounting to 600,000 euros.

Along these lines, he lamented that the Cabildo does not have “any clear and exhaustive communication” and specified that it needs legal reports that support the total suspension of the works so that “no court knocks it down.”

Martin has recognized that “the machinery is stopped and no works are being carried out” but has indicated that the Cabildo “does not give licenses to build a hotel or approve partial plans, “it only reports on what it is responsible for” and in that sense, it has been asked what the General Directorate of Heritage is going to do, which is the one who “has the file in its hands”.

“We will paralyze the works if you tell us, but any step requires reports endorsed by officials,” he added, stressing that the matter “is in the hands” of the general director, Nona Perera.

María José Belda, spokesperson for Sí Podemos, has said that “the heritage value of the area has been hidden” during the planning of the planning and requested a report from the legal services of the Cabildo to evaluate the criminal proceedings against the promoters of ‘Cuna del Alma’.

He has demanded the total suspension of the works because information was “deliberately hidden” from the Cabildo, questioning the role of Cotmac in the approval of the partial revision of the PGO because there were irregularities.

It has also been asked if the director of the project, Andrés Muñoz, incurred in “incompatibility” as manager of Metrotenerife by acknowledging that he had been working on its planning for “many years”.

Belda has criticized the treatment that activists have received in the area and insisted that “everything is illegal” around this project, with up to two contrary reports by officials of the corporation.

He has valued the “precedent” of the sanction of 600,000 euros imposed by the Government of the Canary Islands and has blamed CC for not properly supervising the processing of the project when the nationalists occupied the presidency of the Cabildo. “We are assuming the errors of previous mandates”, he has commented.

Belda: “it is a shame to continue selling this land”

Belda has stressed that “it is a shame to continue selling this land” and promoting the same development model that only generates “poverty” in the islands.

He also does not understand that Perera is “blamed”, which has been the “only policy” that has imposed a penalty for heritage in recent decades, when the PSOE also manages the Ministry of Ecological Transition.

Zaida González, spokesperson for the PP, has commented that the processing of the project has been “extensive and laborious” since 1985 and assuming that “something always fails” in the processing of documents, for which she stressed that the important thing is to find a “solution “.

He has recognized that there is no “certainty of legality” with the project beyond the fact that 98% of the land does have permission for the works to be carried out, pending a report from the Ministry of Ecological Transition on the sad viborina or tajinaste del cardona . “We may like it or not, but this is the legality,” he pointed out.

He has accused Martín of “generating insecurity” by putting himself in profile with the project when 98% of the project is free of charges to continue with the works, while he has lamented that all the public institutions in the project have “ignored “.

Javier Rodríguez, counselor of the Socialist Group, has valued the “rapid and immediate reaction” of the Cabildo to respond to the complaint of the Tegüico association and now, with the works partially paralyzed, it is up to the Government of the Canary Islands to “pronounce”.

He has lamented the slowness of Nona Perera to take precautionary measures once the economic sanction was set for the company. “He is being not very diligent”, she has detailed, given that the Cabildo is still waiting for a possible precautionary stoppage of the works in full.

Rodríguez has shown “respect” to the activists who protest against the project and censored the violence received.

Carlos Alonso, spokesman for the Nationalist Group, commented that this project “is of great interest” to the citizens of the island, underlining that “the most important thing” is to protect the natural and cultural values ​​of the island, giving as an example that the two regional laws , from 1999 and 2015, were promoted by nationalist governments.

He has indicated that if in Cuna del Alma there has been “damage” to heritage, action should be taken accordingly, also because it demonstrates the “legal certainty” of the archipelago.

Alonso has recognized “failures” in the project procedure because the powers between administrations do not seem clear either and he understands that it is necessary to ensure the protection of the rights of all “without resorting to violence”.

He has snapped at Belda “to look at her party colleague” –Nona Perera– because she is the “main person in charge” of being able to paralyze the works.

Enrique Arriaga, spokesman for Cs and vice president of the Cabildo, has said that “everyone” wants to preserve the island’s heritage and environment but has defended working with “legal certainty” in accordance with the rule of law.

He has commented that “economy” is needed on the island because “complicated times” are coming and it is not possible to “generate distrust” among investors after several decades of processing the project.

Arriaga has condemned the violence that originated a few days ago in Puertito de Adeje and does not share “the assault on private property” that was carried out in the facilities of the promoter company ‘Cuna del Alma’ and that many people “cannot work due to the stoppage of works. “We have legislation that guarantees and has been shown”, he commented.

The Urbanism building, a new proposal to house the future headquarters of the Capital Local Police

They withdraw 100 electric scooters in Arona for obstructing its streets

Open the period to request aid for home renovation

Herbania opens in a big way, with a thrashing against Tenerife B