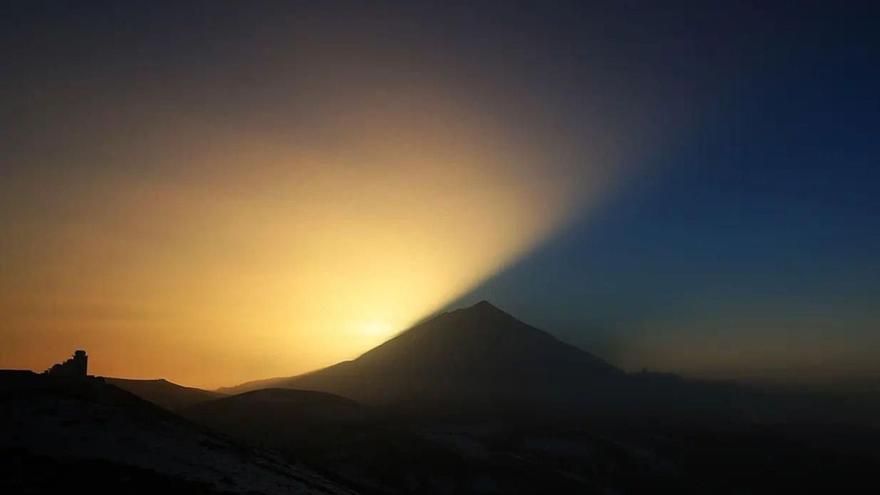 The rainy, unequal in terms of geographical distribution and intensity, give way in Tenerife while stable with some residual episodes of haze. Wind is now the dominant weather phenomenon. It has hardly snowed in the Mount Teide and it is unlikely that it will do so in the next few days, at least during a weekend in which the weather will be marked by a mass of warm continental air coming from the east. The storms have lasted very little to leave room for that characteristic southern weather, although it is not so usual in winter.

David Suárez, provincial delegate of the State Meteorological Agency (Aemet), explains: «The rainfall episode, with special relevance in Izaña and the area of ​​the Teide National Parador, has passed». There is some cloudiness left in the environment that will gradually disappear tomorrow (for today) ».

Suárez details that “the dominant note will be the southeast-northeast direction wind with some strong gusts in summit areas, although without reaching the category of warning because they are very scattered and not very constant.” The delegate of the Aemet adds that “there will be low clouds typical of the southern component weather at medium levels and below, a mass of dry continental air from the east that continues to displace dust in suspension from Africa and counteracts the possibility of rain.”

The forecast for the weekend is “stable and dry weather with an easterly component, with little cloudiness.” The snowmen will have to wait for the next occasion because “the temperature is too high for the snow to set. It hasn’t snowed heavily these days and most likely it won’t.” The call to the environment of the National Park confirms it exhaustively: “It has not snowed last night or so far this day (yesterday) nor will it snow because the southern weather is present.” The forecast for today is of medium and high clouds with little probability of weak precipitation. Probable haze and minimum temperatures unchanged or slightly decreasing. East or southeast wind.

The very strong gusts on the north and west slopes, as well as on the summits, caused some damage in the north of the island. In high areas of Tenerife, local speeds exceeded 100 kilometers per hour. A dozen incidents were recorded in the municipalities of La Orotava, Puerto de la Cruz, Los Realejos, El Sauzal and La Laguna. There was no serious damage, although there were tree branches and fences falling or containers moving, as recorded by 112. The most notable were the contrasts and the storms – here yes – in the southern midlands, such as in San Miguel de Abona, hail for a few minutes in La Esperanza (El Rosario). There the early morning downpour gave way to a splendid day, “clear, sunny and very beautiful,” the sources detail. Something similar to what happened in Santa Cruz. In the capital it went from the early morning downpour to the almost suffocating heat during the day with the mixture, in a fairly clear sky, of the remains of the everlasting haze with some clouds.

From the cold to the tropics in 600 meters

Juana is a cleaning worker and exemplifies the perplexity of the people of Tenerife at the radical changes in the weather in recent days. He lives in La Laguna and works in Santa Cruz. He left home yesterday with 13 degrees and dry weather. Once in the capital, it was difficult for her to get to her post -early, even at dawn- due to the impressive downpour that she contemplated lost in thought for ten minutes under the protection of a building’s portal. When he went out into the street mid-morning, the sun cracked the stones with an almost clear sky, an intense blue, some clouds and the obvious remains of a haze that seems not to want to leave the islands. Juana went from cold to tropical heat in a couple of hours and barely 600 meters, the ones that go from Aguere to Santa Cruz. Back home, the wind had taken over the area where he lives, in the middle of the Vega lagunera. Cold, heat, haze, wind… All are worth, together and separately, to draw the weather these days in Tenerife. Juana has experienced this unusual mix of meteorological phenomena firsthand. | jdm

Fruit, cheese and mojo to celebrate the Canary Islands