A tree split in half in the middle of the road, the first damage in Tenerife due to strong gusts of wind 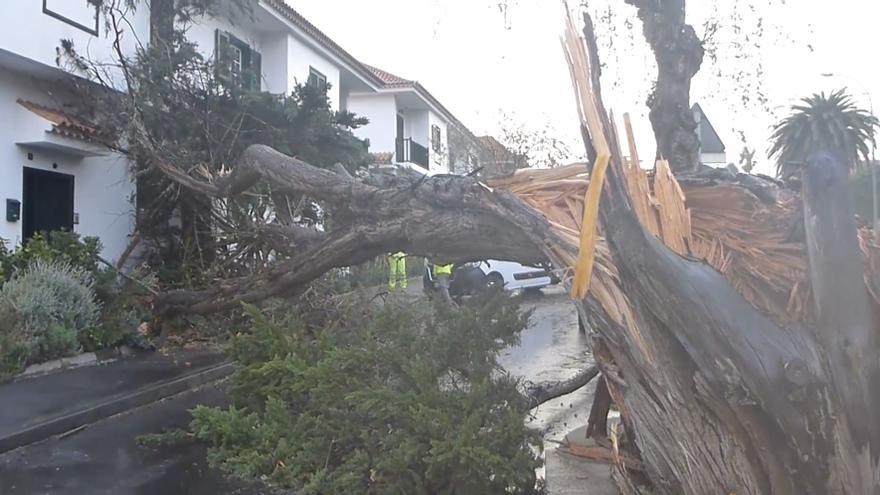 The strong gusts of wind, which have reached 100 kilometers per hour in some areas of Tenerife and have been reported since this morning, have already left significant damage on the island, including the spectacular fall of a tree on the road General of the North passing through El Sauzal.

The weather situation will hardly improve throughout the day, with more gusts that will blow from the moderate to strong southeast at the beginning, with the southern component predominating in high areas. According to the State Meteorological Agency (AEMET), the winds may exceed 90 and 100 kilometers per hour in the first hours on the summits and on the north slope. From midday they will decrease in intensity, except in central peaks where very strong gusts will persist all day.

For this reason, it has been decided to activate this Monday in the northern part of the island an orange warning for wind and a yellow warning throughout the island for rain and coastal phenomena, as reported by the AEMET.

Landslides have also been reported on the island, such as the one reported by the Local Police of Santa Cruz de Tenerife on the Las Acacias road. “Circulate with caution”, they warned in a message shared on social networks, where they also reported that the municipal resources had already been notified for their correct signaling and possible repair.

The weather forecast for this Monday, January 17, indicates that there will be cloudy or covered skies with widespread rainfall that may be locally persistent and likely to be strong and accompanied by storms, especially in high areas and in the form of snow on Mount Teide .

Similarly, there will be intense haze in the early hours that will be deposited with precipitation, as reported by the State Meteorological Agency (Aemet).

Temperatures will drop slightly to moderately, more significantly in inland areas, and thermometers will range between a maximum of 21 degrees in Tenerife and a minimum of 11 degrees on the island of El Hierro.

Specifically, the wind risk, which will affect the entire archipelago, foresees gusts of between 80 and 70 kilometers per hour (km/h); while the warning for rains, which will not affect the islands of Fuerteventura and Lanzarote, foresees an accumulated precipitation that will reach 15 mm.

Regarding the waves, the yellow warning will affect the western province, expecting a force 7 southeast wind on the west coast of La Palma, northeast of El Hierro, southwest of La Gomera and the Canal between La Gomera and Tenerife, occasionally being force 8 in the north exit of this Canal

A route of up to 30 nativity scenes through La Orotava

The Canary Islands are planted against beauty pageants