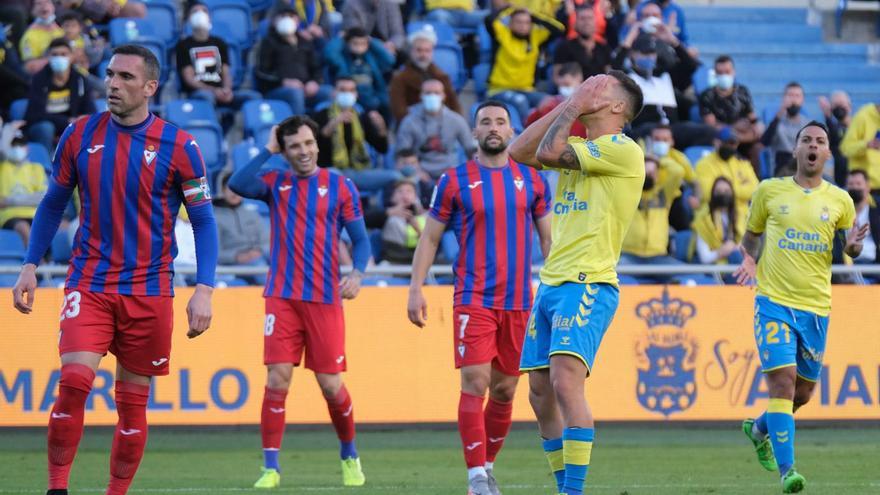 A sensitive loss for the derby on January 2. Nothing more and nothing less than that of the author of the goal of the last victory of UD Las Palmas over CD Tenerife, on October 16. This is Álvaro Lemos, who suffered a tear in the adductor that will keep him out for the next six weeks, which means that he will not play again until February.

The Galician had the mishap during the appointment of Gran Canaria against SD Eibar, the last of the year and the first round (0-1). In an attempt to intercept the ball after a deep pass from the rival side to the extreme, the yellow footballer he overstretched his right leg and broke it.

The first examinations of the medical services of the UD determined that he had a micro-rupture, a question that a few days later an MRI scan, which determined the exact extent of the injury, confirmed. In summary: right adductor rupture and six weeks sick leave.

Pepe Mel loses, therefore, his starting right-back for one of the most important appointments of the season not only because it is a confrontation against the maximum rival, but also because it adds seven more points and is a direct enemy in the fight for the playoff. It was also the one that scored the winning goal for UD in the last injury-time derby and the one that caused total madness in Siete Palmas.

In the absence of Lemos, the starter in 19 of the 21 days played – one was lost due to sanction and the other due to being unwell – so far, Ale Díez is running as the starting right-back in the Rodriguez Lopez, however, the Madrid coach could return to bet on Eric Curbelo, as he did when he had to move to sign against Eibar after the Galician’s injury.

It was the 33rd minute of the last game of the year when Mel surprised everyone with the modification of the half of the defense instead of replacing the injured with his natural substitute. That decision to put Ferigra in the center of behind so that Curbelo, the fittest of all, to move to the side came out a frog: the gunsmith box soon marked the product of a mismatch.

Later, the satauteño requested the change in the rest due to a discomfort in the adductor and it was then when Ale Díez entered the field. The tests to which it was subjected ruled out that it suffered a break, so it will be available for the crash of Heliodorus.

Who else will be able to play is Nuke Mfulu, whom the coach recovers after two months injured. The Franco-Guinean suffered a tear in his right hamstring on October 29 at Anoeta, and his recovery time was estimated by the club at eight weeks. The deadlines have been met and the midfielder, in fact, has already worked with the group before the holidays, so he will be ready to start in Tenerife, although it is evident that he does not have the adequate rhythm of competition.

A similar case is that of Francisco Jesús Crespo Pejiño, that in principle he was going to return in the derby and finally he did it before, last Saturday against Eibar. The Barbateño had also been without participating for almost two months due to discomfort in the ischium that never resulted in an injury, but the player did not finish feeling well.

Thus, the only casualties that Mel has to face the eternal rival are those of Lemos and Rafa Mujica, who will return in mid-January after suffering a muscle break against Vélez, in the Cup. The rest are there.

The Francoist traces that Santa Cruz must remove and why

The last half century of Spain through the life of Ramón