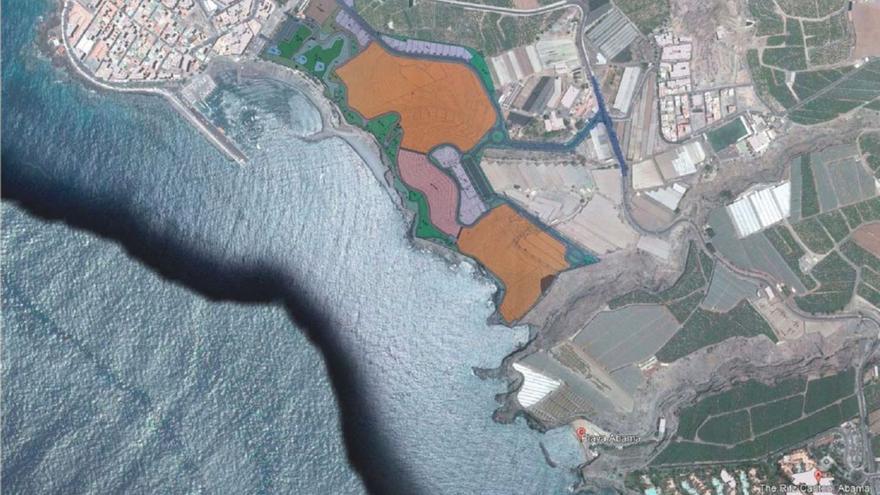 Although it is currently undergoing some modification, the project initially proposed includes the construction of the hotel complex and a set of tourist apartments, among which 1,100 beds (600 and 500, respectively) would be distributed. In addition to hotel and residential use, the development of this initiative includes commercial premises, facilities and public areas.

The promoter company, with more than 30 years of establishment on the Island, reports that With this project it is proposed to introduce new features in the current construction model. «Grupo los Menceyes, through its own architecture studio –W Arquitectos– and in collaboration with Greek architects» of world renown, «wants to bring to the Island an innovative Mediterranean style, with Greek influence, to create a resort that under the same concept will combine luxury, well-being and relaxation, ”says the Stan Weytjens team.

The area in which the Guía de Isora hotel plant will grow is an added value to the project. The promoter emphasizes that this place “has a lot of potential as it is located within the authentic town of Playa San Juan”, in front of the fishing port and the natural beach, covering one kilometer of the Isoran coast. What’s more, Two of the most luxurious hotels in Tenerife’s tourist offer are located in the surroundings, the Ritz-Carlton Abama and the Gran Meliá Palacio de Isora, as well as a luxurious residential setting close to a golf course. To all this is added the presence of prestigious catering establishments recognized with several Michelin stars.

The Los Menceyes Group is a family company of Belgian origin, operating since 1975 whose activity is carried out today by the third generation. It is a company dedicated to the development of real estate projects in Tenerife, with initiatives of reference for its design, quality and verifiable volume in Palm Mar, a town that serves as an example of its work on the Island. It began with the construction of luxury villas in this nucleus coinciding with the beginning of the last decade of the last century. This company reports that it develops its projects with its own personnel, both in architecture, interior design, commercial and sales, as well as vacation rentals, which allows them to control the entire quality process, he assures. The property states that “with this operation, Grupo Los Menceyes, together with its investors, expands to one of the strategic areas in the south of the Island to consolidate its real estate promotion ».

The Agua Dulce Farm is the germ of this plot in which Grupo Los Menceyes acquired the land (150,000 square meters) that the Catalan real estate group Mimeisa Asset Management had in the area – leading specialized portals estimate the disbursement of around 20 million euros – and on which he planned to build another hotel complex. From the development of the regulated administrative procedure to enable and develop the urbanization of this space, in order to carry out the authorized constructions, the owners of some of the farms that make up the partial plan for the Costa San Juan sector were taken down. At present, the process of expropriation of these parcels is nearing completion. From there, it is up to the Compensation Board – the body that brings together all the owners of the plan – undertakes the compensation, reparcelling and urbanization projects. In all this, the period estimated by the experts until the start of the construction work will be consumed.

The urbanization project of the plot on which the tourist and residential complex that reactivates the development of the island’s hotel plant will be built has already been drawn up. Its execution will benefit the Guia de Isora Town Hall, through the mandatory transfer of land established by law to the developer, since in them it will proceed to create public spaces and locate various municipal equipment for general use.

The realization of this tourist and residential project (according to the definition of the promoter) is equivalent to the reactivation of construction linked to tourism. Likewise, for Guía de Isora it implies the launch of the new hotel facilities program with which 2017 began. The case of Costa San Juan ratifies the forecast of the Isorana mayor, Josefa Mesa, who a year ago indicated this project as the first to start its construction.

The prediction of the mayor

“We hope that next year we will see urbanization works and, in some cases, the hotel itself. The interest continues to be manifest and I believe that we are entering a more stable moment that will allow the commissioning in two or three years ”. This pronouncement made by the mayoress of Guía de Isora, Josefa Mesa Mora, last September, heralded the advancement of tourism development in a municipality “that does not fall below the five-star luxury model.” Since 2017 there has been talk of other luxury projects, such as that of Villa de Erques, on the Isorano border with Adeje. With a biosustainable approach, it has Canarian capital, it will occupy a 150,000 square meter plot and will have 930 beds. In Los Maguenes (Playa San Juan), designed by architect Norman Foster (Foster & Foster), the project, from Grupo ICIO (owner of Bahía del Duque), includes an 18-hole golf course. And next to Cueva del Polvo, the fourth luxury hotel project is planned, which will be built on 250,000 square meters. The financing, in this case, is of Russian origin.

The TS definitively annuls the mobility rule of Santa Cruz

These are the positions offered

The Celia storm leaves a blanket of snow on Teide

José ‘El Curro’, Arafo’s handyman: “Before there were only goats, forest and manure”