Two ovens in the crater of Teide 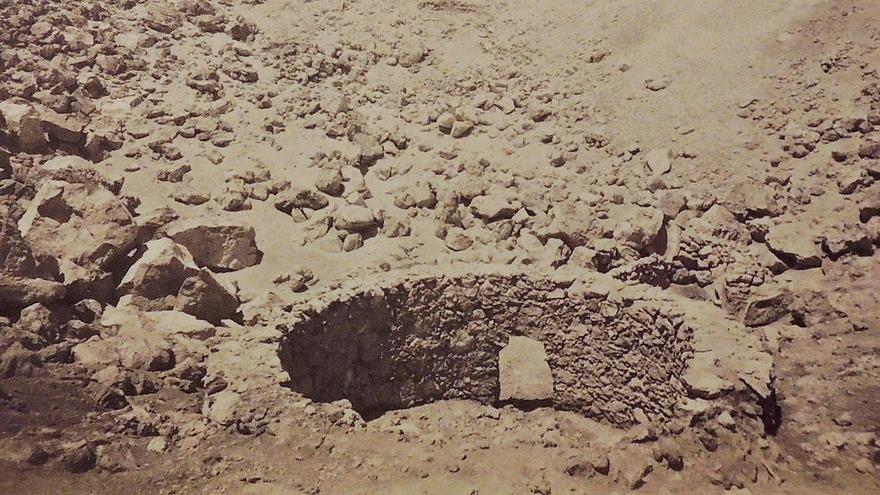 The painful and self-sacrificing task of extracting sulfur from the highest part of the volcano began shortly after the conquest, in the year 1511, and continued until the middle of the 20th century.

Oskar simony (1854-1915), son of the Austrian geographer and mountaineer Friedrich Simony (1813-1896), is the author of the photographs that show that the inside of the Teide crater was a workplace. Oskar Simony made a research trip to the Canary Islands between 1888 and 1889 and took numerous photographs that are preserved in the Museum of Natural History in Vienna, Austria. Among those images, acquired and disclosed by researchers such as Rafael Cedrés, Montse Quintero García or Juan Antonio Núñez Rodríguez, highlight those that clearly show the existence of a circular furnace in very good condition, and the remains of another, inside the crater of the Teide. They are the last vestiges, barely visible today, of the painful and sacrificial task of extracting and melting sulfur at more than 3,700 meters of altitude to sell it, later, for agricultural uses.

«Oscar simony on his visit to the crater the July 25, 1889 says there was a non-operational sulfur furnace, located at the bottom of the crater. In none of the descriptions of the interior of the crater published until 1884 in newspaper articles, magazines and publications of the travelers who climbed, does it mention the existence of this sulfur furnace».

The first documentary reference to the existence of the furnace to refine sulfur appears, according to Cedrés, in the book of Isaac latimer Notes of travel in the Islands of Tenerife and Grand Canary, written in 1887. «Through The Tenerife Gazette from May 31, 1922, we also know that this year the remains of the kiln called Funes were still preserved, which on some occasions was also used to herd cattle “, indicates Cedrés, who adds that Simony’s photograph is the one that allows deduce that “in the crater there were two furnaces.”

Juan Antonio Núñez Rodríguez, author together with Montse Quintero Garcia from the book Summit experiences, underlines that “there is an explanation of why sulfur melted at the foot of the mine that is none other than to lighten the weight of the product that had to be lowered from the top of the summit. Melting at the top, only the sulfur was lowered and the rest of the minerals with which it was mixed were left behind ».

Image of the crater of Teide taken in 1889, where you can see a sulfur furnace and the remains of another Oskar Simony-Museum of Natural History of Vienna-Volcano Teide-Rafael Cedrés

On Experiences at the summit, Núñez and Quintero They detail that “the sulfur stones were mixed with earth and other residues, and in order to obtain pure sulfur, they were introduced into reverver furnaces that were heated with wood. The ore was placed in an adjoining chamber and the molten sulfur was extracted from the bottom of the furnace. ‘ The extraction was a “painful and dangerous work” because of the “difficult environmental conditions in which it was carried out”. The sulfur they had to exert great physical effort at high altitudes, with great changes in temperature and while breathing the gases from the fumaroles. “To the danger of the extraction works were added the difficulties of the accesses, which in many cases caused accidents and precipices”, detail Núñez and Quintero.

Inside the crater too a wooden hut was built for workers to store their tools. In the area of ​​the current Altavista Refuge, another booth was raised, as in The Rambleta, where there was another oven. Charles edwards, in his book Rides and studies in the Canary Islands, published in London in 1888, writes that “in Altavista there was a wooden hut of white color, of solid construction that belongs to those who exploit the sulfur of the peak. The door is closed, and it is only possible to enter through a window. Inside are pickaxes and hoes. ‘

The work of the sulfur workers for more than four centuries generated changes in the landscape of the top of Teide. The crater we see today was excavated and removed for more than 400 years to extract sulfur, so its current state is largely the result of those arduous works, which were carried out through concessions or illegally. Tomás Méndez Pérez, in his book Historical Background of Teide and Las Cañadas, says that “sulfur stones were transported on mules loaded with sacks of mineral, which sometimes fell due to the insecurity of the existing trails.”

“Although sulfur continued to be extracted clandestinely, the main extraction was through concessions, and there is documentary evidence of the existence of applications for the exploitation of sulfur ore on Teide since 1884,” according to the Cedrés study. Local and foreign businessmen saw sulfur as a business opportunity. In the Diario de Tenerife of June 7, 1887 one of these business initiatives is reported: «We have had the pleasure of seeing a sample of sublimated sulfur, extracted from Teide by our friends the gentlemen Nicolás Ascanio and Rafael Frías, from La Orotava, who have been in this capital these days making preparations and acquiring the necessary tools to undertake, from this month, the large-scale exploitation of sulfur at the top of the peak. For the owners of the mines and for the country in general, which cannot but benefit from the exploitation of an article of such great need among us and that today it is necessary to import it, we will celebrate the complete success of the company of Mr. Frías and Mr. Ascanio ».

Thanks to the research of Cedrés it is known thate a few years later, in 1912, the Diario de Tenerife reported that the English company La Cima Limited bought the Teide sulfur exploitation concession and three engineers visited the mines on June 23, 1912: «You have reached this port Mr. Yuckerl engineer sent by the Society La Cima Limited of London to start work on the sulfur mines of Pico de Teide, whose concession has been acquired by the aforementioned company. If the business responds, it is said that said company will lay an aerial cable from that height towards the nearest coast and more specifically to carry out the shipment of the extracted mineral. If this were to take place, we would be in luck, not only because of the importance of this source of wealth, but also because a large number of workers would be employed. ‘ Nothing is further from reality. The extraction of sulfur in the Teide it was always very limited, due to the difficulties of the terrain, the scarce availability of the element and the long distances to travel. The activity began to decline a lot after 1847, when sulfur was allowed to be imported. From 1894 it became common to see advertising of imported sulfur for fungicidal uses in the Tenerife press. “Some concessions continued to be requested until 1945, but most were never exploited,” recalls Cedrés.

Rafael Cedrés collects in his research work The exploitation of sulfur ore on Mount Teide 1511-1945 references to testimonies such as that of Alejandro Llanos Domínguez, born in Icod el Alto in 1917, who reported in an article Cirilo Leal: “They left home around eleven o’clock at night or even earlier, mounted on beasts. Once at the peak of Teide, the sulfur stones inside the caves chipped; later they filled them in sacks and dragged them carried them to where they had left the beasts. They loaded them until they saw that the animals could not handle more and they left back towards the town, where they arrived at dusk. The next day they were taken to the Holy Cross to the mill. Once ground, they paid the miller and proceeded to sell the sulfur powder in the south of the island, where they went on foot to the summit. Sulfur was used for the vineyard, tomatoes, or whatever was needed. He affirms that the work of sulfur was not enough to eat. Or that of Liborio López Ramos, born in 1931, also rescued by Leal: «The sulfur workers would take the beasts to Altavista and then lower the sulfur sacks. The sulfur was taken from above like gofio. They also took out sulfur stones that later had to be ground. It was used for the vine and tomatoes. Some sold sulfur directly in warehouses and they resold to winemakers. On the blog Ephemeris, by Bruno Juan Álvarez Abreu, Eduardo Mesa points out that Antonio Mesa Romero, his father, “traveled several times a month to Las Cañadas on the back of his horse in search of sulfur.”

Simón Herrera, the priest of the 500 climbs to Cosme

An early harvest starts, uneven and with the threat of pests