The derby and the goal of Viera and Jesé 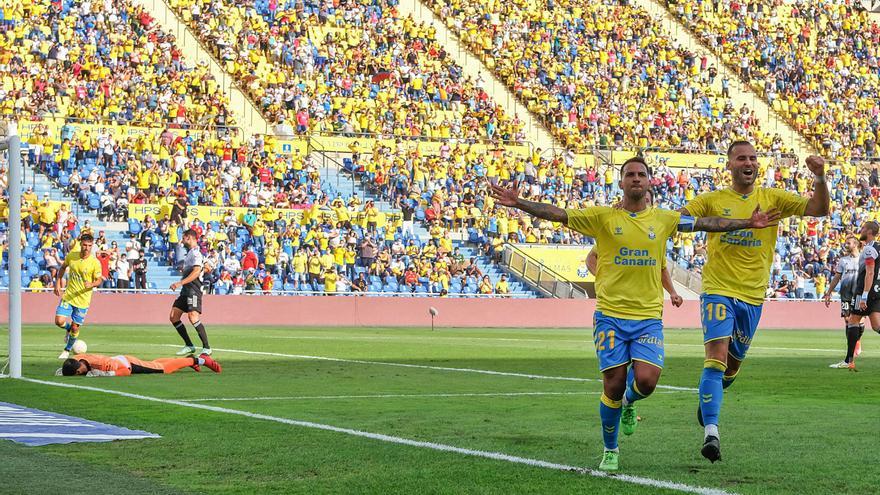 The playmaker and captain of Las Palmas Viera, 31, has 95 goals in his professional career – defending the colors of UD (56), Beijing Guoan (30), Rayo Vallecano (6), Valencia (2) and Standard de Lieja (1)-. Beating CD Tenerife in an official duel is a matter of state for the genius of La Feria. Romario, in a moment of maximum inspiration against the rival goal after beating Cartagena with a maximum penalty (4-1) and Almería in the 90th minute at the Mediterranean Games (1-1), has not managed to pierce the arch of the eternal rival after eleven professional campaigns.

His ability to resolve was clear to the leader after taking advantage of a shipment from Raúl Navas. He was the best along with Satauto defender Eric Curbelo. But the classic Canarian arrives, the shortcut to immortality as was clear with the goals of Marcos Márquez (2008), Mauro Quiroga (2011) or Vicente Gómez (2014).

In the playmaker’s record there are three episodes against the Blue and Whites with a balance of two draws and a victory for ’21’. His baptism in the classic Canaries was at the Heliodoro (1-1) under the command of Paco Jémez and that raised Mauro Quiroga to the altars with his goal in 87 ‘.

Romario completed the 90 minutes on January 23, 2011, which stretched the cycle of the Cordovan on the Gran Canaria bench. Oxygen balloon until dismissal on February 26. Juan Manuel Rodríguez would finish the course with a decorous eighth place. Precisely on the 42nd and last day of that course, the UD with both Sergio Suárez from a penalty (1-0) beat ‘Tete’, which certified the relegation to Second B in Siete Palmas.

To the two duels in 2010-11, we should add that of the second round of 2014-15 at Gran Canaria (1-1). In that chapter, with a stadium under construction, Maxi Pérez advanced to Tenerife and Hernán Santana scored the equalizer (1-1). Romario retired under a blanket of tears, escorted by the head of the ‘physios’ team Juan Naranjo, due to a muscle injury (47′). He was relieved by Momo on March 1, 2015.

In that stretch of the competition, Viera did not play the indisputable role with the Catalan coach Paco Herrera, once recovered from the muscle injury, he carried the UD steering wheel towards promotion to First with a sublime performance until the magical ’21 – J ‘. 224 minutes, the unbeaten condition against Tenerife and a debt with the goal. It is worth remembering a goal in Maspalomas in the Mahou Cup in 2017 against the Tenerife team of lack, in the middle of the summer of rumors about the sale of the international attacker of La Feria, which would finally be transferred to Beijing of the Chinese Super League in February 2018.

He is facing his fourth cycle at UD and is labeled as one of the great players in the silver category. The Almería Rubi coach came to describe him as “galactic”, a category in which he also includes Jesé. The ’21’ accumulates 56 goals in 195 duels with the UD. His favorite victim is Valencia -club in which he played-, which he has scored five times.

Barça B (4) is second in their table of favorite rivals. He is the 12th highest director in the history of the Gran Canaria club, tied with Manolo Torres (56), and threatens the record of Eloy Jiménez (58). On August 27, on the day of his presentation, he was questioned about the importance of finally beating ‘Tete’. «They are special matches, especially for the people and the fans. We will try to make them happy, “he determined.

Flying poster on the Heliodorus

Jesé Rodríguez has 21 games in the Champions League. With 93 appearances in Primera and 62 in the silver category, the 28-year-old attacker has not marked CD Tenerife either. It premiered in a Canarian classic in the last precedent of the rivalry, on March 28 at the Heliodoro (1-1). The yellow goal was achieved by Sergio Ruiz and the former player of Real Madrid, PSG, Sporting Lisbon, Stoke City and Betis was withdrawn in the 75th minute to admit Rafa Mujica. He kicked the ‘sign’ of the fourth referee, when he passed the delegate Rubén Fontes and before greeting José Mel Pérez.

Beyond the derby of the flying tablet, Jesé, in his journey as a star of Real Madrid Castilla, participated in the victory (3-1) against Tenerife in 2011 in the dispute of the eighth day of Second B. In the second round of the aforementioned campaign in the bronze category, the Tenerife bloc clearly prevailed (3-1).

The merengue team was directed by Toril and had the Gran Canaria Mandi, as well as Carvajal, Nacho and Lucas Vázquez -the three in Carlo Ancelotti’s first team-, or the Valencian player Cheryshev. A victory, a draw and a defeat. The episodes of Jey-M before the ogre of Teide.

As if it were a demonized wolf, the appearance of the ’10’ in Primera with Madrid was idyllic. He scored at the Camp Nou and at the Mestalla. In his list of favorite victims: Villarreal (3), Osasuna (3), Huesca (3) and Guadalajara (3). The atomic stiletto of La Feria also marked Arsenal or Roma.

In Viera’s 195 games with the UD, he has been the protagonist of different talent partnerships with Araujo, Vicente, Tana, Roque Mesa, Willian José, Prince Boateng, Jesé himself in First Division and with the Ballon d’Or nominee Pedro González ‘Pedri ‘. And now, the caviar couple reign in Second with five targets. The ’10’ saw the door against Valladolid, Huesca -a penalty- and Cartagena with Vaseline. For its part, the ’21’ begins to complete merits to dethrone Germán Dévora in the ranking of the highest director in the history of the UD.

Ramis and the defensive mechanisms in the face of the La Feria tsunami. The outstanding debt with the history of ’10’ and ’21’. The first beat Navas at the Bernabéu and the second took the Camp Nou. They need to appropriate the Teide, the Parthenon is ready. Viera needs to be crowned in the most galactic classic.

Rodríguez laughs in the Gomeran corner

The alert for strong winds in the Canary Islands ends