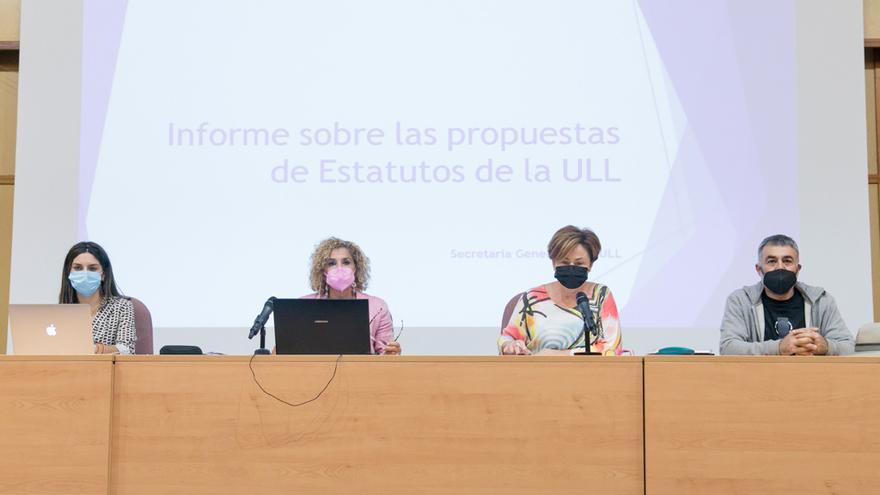 The Cloister of the University of La Laguna has approved this Thursday, September 16, the new Statutes of the academic center, which must now be ratified by the Government of the Canary Islands for their entry into force. The collegiate body thus renews the basic rule of operation of the academic center, which dated from 2004, updating its content to current legislation, and simplifying and ordering its articles. The text moves the exams from September to July, guaranteeing the same evaluation options for students, and thus achieving a better structuring of the university calendar. The new articles on the examination session would not come into force until, foreseeably, 2022/23.

The statutory document approved in today’s session is based on a 2017 reform draft, which finally did not see the light. Starting from it, a commission made up of representatives of all cloistered groups has worked since February to present the final document to the plenary session of the Senate, on which there has been broad consensus, except for the article dedicated to the call for examinations in September. Therefore, three possible proposals have been brought to today’s plenary session.

The option chosen by the collegiate body has been that of the Renovación Convergente (RC) and University Participation Network (REDULL) faculty groups, together with the Student Group of the University of La Laguna (GEULL) and Student Freedom (LE). His proposal, which received 129 affirmative votes, obtained an absolute majority of the body in the first vote, thus rejecting those presented by the Alternative Teachers Program (PAP), which obtained 63 votes, and that of the Canary Islands Student Assembly (ACE), which achieved 20 votes.

The winning proposal opts for a continuous evaluation system, and indicates that the student body will have the right to three evaluations within the framework of two official calls before the end of July. With this, the current September call would be moved to July, in such a way that students do not lose evaluation options and the academic calendar is better organized, which until now overlapped one course with another.

In contrast, the PAP option proposed two calls: a first, with continuous evaluation throughout the course and in the event of not passing a final exam; and a second call, with the final exam (or recovery) in July, thus eliminating September. The third possibility, at the hands of ACE, sought three calls for both annual and four-month subjects. The student body would have the right to pass the subjects through continuous evaluation, which will represent 100% of the final grade, without suspending this evaluation modality in any case that the call was exhausted.

The secretary general, Elvira Afonso, pointed out at the beginning of the session that the new text also contains an update of the wording and changes in its formal structure, such as a better systematization in the description of the governing bodies or a more coherent internal regulation. Likewise, the chapters dedicated to teachers and administration and services personnel have also undergone changes, as their typology, legal regime or rights and duties have been delimited. Concepts related to university services are delimited and, in turn, the entire text has been adapted to inclusive language.

The statutory text lightens the regulatory weight, reduces and simplifies the budget process, incorporates the School of Doctorate and Postgraduate Studies and the Gender Equality Unit, and further clarifies the role of control of the Intervention. These were some of the novelties contained in the norm outlined by Afonso, before moving on to the cloister’s turn for interventions.

The PAS in Action spokesperson criticized the fact that amendments to the text could not be presented, although there has been previous work by the working commission, made up of all the groups. In his opinion, the document under discussion does not show a great democratic advance, since the composition and powers of the university’s governing bodies have hardly changed. Finally he spoke out against the approval of this text.

Space for the PAS Unit (EUPAS), for its part, pointed out that this reform, although it comes late, is absolutely necessary. He regretted that there was not a total consensus in the working committee, from which three proposals related to the regime of student calls were shelled. He asked the cloisters for institutional responsibility to reach the approval of one of the proposals, even if it was not the one of his first preference. For its part, Grupo del Pas was very brief, thanking the groups for their collaboration in this work and wishing a good end to the session and consistency in the vote with the long work carried out in the committee.

Student Freedom stressed that it is a more accessible and understandable rule. The proposal that he defends together with other groups of teachers and students does not reduce examination possibilities and does not diminish the rights of the student body, he said, since it is reordered in the academic calendar, but none is abolished, he said.

University Participation Network (REDULL), from the teaching staff sector, argued that the new statutes will allow the improvement of the university’s operation in all its areas and that the institution can more easily adapt to the new national regulatory framework that is in process . His group, which defended the consensus proposal, affirmed that a solution has been sought for the examination session that satisfies everyone.

Asambela Canaria de Estudiantes (ACE) stood up in defense of a public, quality and free university, in a way that allows the social advancement of the less favored. He criticized the state of the infrastructures and requested that the Government of the Canary Islands be required to provide the necessary funding from the university. The defense of the so-called third call or September is due to academic criteria and has also been supported by the Student Council, he said. This call is not substitutable for a continuous evaluation, he clarified.

Convergent Renovation, of the teaching staff, pointed out that it is necessary to think about voting the statutes as a whole. He explained that he does not want students to lose rights, and in fact pointed out that the text contains many resources for this group that until now were not contemplated. The spokesperson maintained that his proposal is agreed by two groups of teachers and two of students, and that his option to take exams is based on the premise that students do not lose exam rights, but adjusting the academic calendar to the semester system. The proposal houses the same number of evaluations, he stressed, but in the framework of two calls, and not three as before.

Alternative Program for Teachers (PAP) was in favor of updating the regulations, establishing a student-centered evaluation model and ending the system of three calls, which represent an anomaly in the national university scene, he said. We must renounce poor performance assessments, said the spokeswoman, who added that no university exceeds the two annual calls per subject. That is why he considered that the current system is inefficient, because it does not favor the teaching process or opportunities for the student body, regardless of the fact that it overlaps two academic years, with the administrative problems that this entails. The group regretted confronting the students on this point, but said it was done out of institutional responsibility and consistency.

Marco González: “Puerto de la Cruz could not afford to disappear during the pandemic”