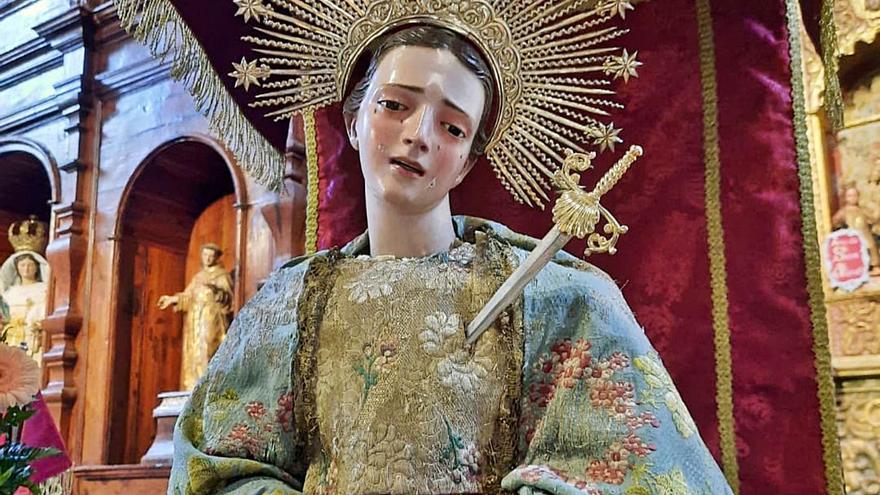 The exhibition will open on October 5 and will remain open to the public in Madrid until February 13, 2022, with the aim of “making visible, through approximately one hundred works, this rich heritage that, coming from the New World, it is preserved in cultural institutions, religious spaces or private collections, mainly in Spain. These objects, arrived at different times in history, are part of our historical and cultural heritage, without us sometimes recognizing the reasons for their presence. The virgin of Icodean and the alligator, popularly known as “the lizard of Las Angustias”, will also be accompanied by the Silver Cross of the Parroquia Matriz de San Marcos Evangelista.

The image of the Virgen de las Angustias that is preserved inside this hermitage was made in Mexico during the first half of the seventeenth century. This carving of great artistic relevance shares the limelight with a unique votive offering or offering in the Canary Islands: a stuffed alligator that currently rests inside a glass urn. This animal is one of the main popular attractions of this hermitage and, according to the aforementioned Brotherhood, it was a donation from Captain Marcos de Torres, founder of the temple, “who on one of his trips to Mexico was attacked by an alligator.” This version indicates that “by invoking the Virgin he managed to save himself and, in the middle of the 18th century, he brought it from the jungle of the Mexican state of Tabasco and offered it to the Virgin as a votive offering as a sign of gratitude.”

The Virgin has a unique votive offering in the Canary Islands: a stuffed alligator placed in a glass and wood urn that was brought from America by Marcos de Torres, the founder of the hermitage.

For many years, the caiman hung from the ceiling of the Icodense hermitage, “but due to its deterioration, it was placed in an urn. In 2017, a taxidermist was in charge of its restoration », details this religious brotherhood in a publication of the year 2019.

José Manuel Padrino Barrera, a graduate in art history, details in his work Los exvotos en Tenerife. Material vestiges as an expression of the prodigious, that this alligator «proclaims his Indian offering condition, based on the link that the promoter of the hermitage where it is located, Marcos Torres, maintained with America, and reveals, surely, the external projection and effectiveness of the Virgen de las Angustias when it comes to helping those who invoke her in overseas territories ”. And he adds that “although the Caimán de Las Angustias is the only one of its kind that can currently be located in the Canary archipelago, it seems that the presence of these specimens was not at all strange in other island temples, as confirmed in Los Realejos ( in the old church of the disappeared Augustinian convent of San Andrés y Santa Mónica, in Realejo Bajo) or in Telde, on the island of Gran Canaria (in the church of San Juan Bautista) ».

The return trip or return trip that gives its title to this exhibition in Madrid «allows us to assess the works of art that came from America to Spain and, by extension, to Europe during the Modern Age ”, according to the organizers of this exhibition curated by Rafael López Guzmán, professor of Ibero-American Art History at the University of Granada.

The hermitage of Las Angustias, in Icod de los Vinos, has a carving of the Nuestra Señora de las Angustias that was made in Mexico in the seventeenth century and with a peculiar votive offering, unique in the Canary Islands: a stuffed alligator placed in an urn of glass and wood that, according to the Brotherhood of Angustias and Dolores de Nuestra Señora, was brought from America by Marcos de Torres, the founder of the hermitage.

Fifteen homes evicted by a forest fire in La Orotava

Torres launches his candidacy in the PSOE without internal response